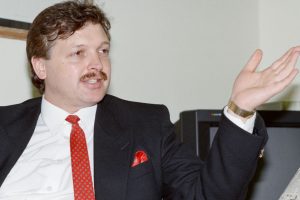 Manchester United were once close to being taken over by a flamboyant property man with a £150million plan before he was pushed away from a deal by the club's hierarchy.

Michael Knighton, at the time 37, tried to buy the Red Devils in the late 1980s with the dream of turning the club into a huge enterprise.

He announced the £10million takeover on August 18 1989, one day prior to appearing in front of the Old Trafford faithful before a match against Arsenal in a full United training kit.

BBC Sport report it was from then, after he juggled the ball and fired into an empty net, that powerful figures at the club decided to prevent the takeover from taking place.

Among those was a senior Old Trafford figure who called the pre-match entertainment ‘ridiculous’ because it was ‘not the United way’, despite fans enjoying the spectacle.

A deal was close by the end of August, but chairman Martin Edwards and his associates put pressure on Knighton to walk away, circulating negativity until word spread that Knighton did not have the money he said he did.

Confidential documents detailing his blueprint to turn United into a £150million operation were also leaked to the media as further pressure was applied to Knighton to withdraw his bid.

And he eventually did, walking away with the promise of a place on the Manchester United board, where he remained until 1992.

Speaking to BBC Sport decades later, Knighton said: "I wanted to show the fans I was a football man first and a businessman second. I wanted to bridge the gap between the boardroom and the terraces.

“Yes, it was novel. It was unorthodox. I knew it would attract interest and criticism. But I didn't care.

“I needed the fans on my side more than I needed Bobby Charlton or Alex Ferguson, whose job was on the line at that time.

"I knew there was a massive captive market. If you are going to exploit that market, not in a pejorative sense, to sell them everything in order to generate the profits to buy any player in the world, you need them on your side.

"Of course I loved it. Who wouldn't? Despite how it all turned out, I don't regret going on that pitch and if I had £5bn to buy Manchester United today, I would do exactly the same again. I was fulfilling every schoolboy dream in the world.”

Knighton eventually bought Carlisle United, which he sold in 2002 before turning his attention away from football completely and towards art.

Meanwhile, United went on to become the most successful club in England during the 1990s, winning six Premier League titles and going on to become a worldwide brand using what is believed to be Knighton's plans.

He said: "I gave Martin my blueprint after we aborted the deal. I said 'there is the cheque for £150m'.

“I am not deluded. I know the truth of the matter. I am a flawed individual but I know what happened.

"I probably kept my mouth shut for far too long. I am not the kind of person to shout from the rooftops about how wronged I had been.

"But it is all history now."

Get your free MATCH ATTAX Trading Cards inside this weekend’s Daily Star Sunday.