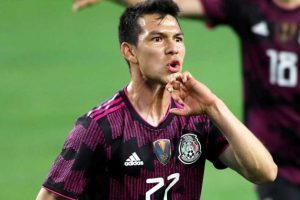 Could it be a trap game for Mexico? El Tri, Mexico’s men’s national soccer team, will be heavy favorites when they face Costa Rica in their Nations League semifinal in Denver.

And there’s a reason for it: Mexico have been rolling under new manager Gerardo “Tata” Martino and they’ve owned Costa Rica in their all-time matchups (just two losses in their past 22 head-to-heads). It also helps that an injury-plagued Costa Rican side is experiencing one of its toughest stretches as a national team.

While both teams will have key absences for this match, Costa Rica has been hit hardest with nine absences due to injury and COVID-19. On top of that, Los Ticos haven’t won a game since November 2019, going winless in seven friendly matches and scoring just two goals in that span.

Given the tough spot in which Costa Rica find themselves, they’ll need the perfect game to pull off the upset. The goal for head coach Ronald Gonzalez is to make sure his team is defensively solid, tactically organized and effective on the counter. That game plan kept things close in the narrow 1-0 defeat against Mexico in their most recent meeting in March. They also took Mexico to a penalty kick shootout in a Gold Cup quarterfinal in June 2019.

But El Tri have been mowing down the opponents since Tata Martino took over as head coach in 2019: They’ve won 21 of his 25 matches at the helm, scoring 61 goals. Although Mexico will have to do without injured star striker Raul Jimenez, midfielder Jonathan Dos Santos and winger Jesus “Tecatito” Corona, they have a deep enough squad to make up for the absences. Hirving “El Chucky” Lozano stepped up with both goals in a 2-1 win over Iceland in their Nations League tuneup match.

What is Concacaf Nations League?

Concacaf, the governing body for soccer in North America, Central America and the Caribbean, launched the Nations League tournament in 2019 to provide a meaningful competition for the 41 countries in the region between World Cup qualifying and the biennial Gold Cup tournament.

The Nations League divides the 41 countries into three tiers with countries promoted and relegated based on performance. The four group winners of the top tier “League A” advance to a Final Four. USA, Honduras, Mexico and Costa Rica advanced to the inaugural semifinal round. Because of the COVID-19 pandemic, the Final Four was pushed one year to June 2021.

What time is Mexico vs. Costa Rica?

Mexico take on Costa Rica in the second match of a Nations League semifinal doubleheader at Empower Field in Denver.

How to watch Mexico vs. Costa Rica in USA

The match will be available in Spanish on Univision and TUDN TV networks and it will be streamed live in English on Paramount+ and on fuboTV (7-day free trial).

It’s pretty clear how this match is going to play out and there’s not a ton of value on the moneyline or props. If Costa Rica can hold strong to start, the first-half draw is not a far-fetched proposition. But if you’re banking on a statement game from Mexico, the +107 on the -1.25 Asian Handicap catches the eye.

The over 2.5 total goals at +118 also stands out. Mexico are missing top forward Raul Jimenez, but up-and-comer Diego Lainez and Napoli’s Lozano, who were both electric against Iceland, are exactly the type of players who can break through a stingy backline.