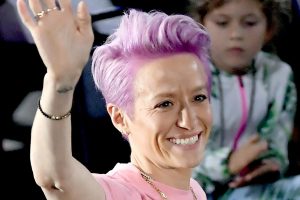 Megan Rapinoe has hit back at Draymond Green by claiming the Golden State Warriors star should better educate himself over the issue of gender pay equity.

The US women’s national soccer team forward was upset after Green accused female athletes of only “complaining.”

Rapinoe and her fellow U.S. national teammates became leading figures for pay equity in the United States after getting into a public battle with their federation over wages and playing conditions in the run-up to the team’s successful World Cup bid in 2019.

She lambasted the recent NCAA basketball tournament organizers for offering inferior facilities to the women’s teams and Green for saying female athletes are not leveraging their position to force companies into increasing the revenues of women’s leagues.

“It’s really unfortunate in the position that (Green is) in, having all of the resources that he has and the ability to have a much more educated opinion, that he just hasn’t,” Rapinoe told reporters at the Team USA media summit on Wednesday.

The U.S. women’s soccer team begin their quest for a fifth Olympic gold medal in Tokyo this summer.