Meet the nine Wales stars who were actually born in England 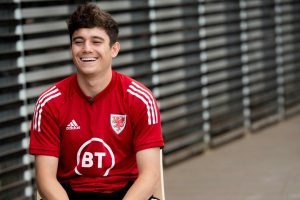 The dream continues for the Welsh as they look to do one better than their incredible Euro 2016 run and reach a first-ever final.

Rob Page's men face Denmark in the round of 16, a tough draw but one that keeps them away from the big hitters such as France and Portugal.

A win against the Danes would set up a quarter-final clash against either the Netherlands or Czech Republic.

In fact, Wales have a number of their own English natives that have gone on to become key players for the Dragons – you can meet them all here.

Apart from Gareth Bale, Chelsea star Ampadu is the only one in the squad with a European medal but the Exeter-born defender could have played for England, Ghana and Republic of Ireland.

His father, Kwame, is a former professional footballer, whose parents were Irish and Ghanaian, while his mother is Welsh.

About as London as Danny Dyer eating pie and mash by the Thames, Mepham was born and raised in Hammersmith and grew up a QPR fan.

The defender qualifies for Wales through his dad's parents and played for Chelsea and Brentford before joining Bournemouth in 2019.

A cult hero wherever he has been, Williams has been plagued by injuries his whole career but not many might know that the Wales international is actually from Pembury, Kent.

His father is from Anglesey, an island off the north-west coast of the great Cymru.

Born in England's oldest town Ipswich, Morrell's mother has allowed him to switch allegiance to Wales – where he has made 18 caps.

Currently plying his trade for Luton Town, the midfielder rejected Liverpool as a youngster to sign for Bristol City.

Back in 2017, Brooks was called up to the Wales Under-20 squad through his mother to take part in the Toulon tournament but withdrew later on to join up with the English instead – where he won the competition and was given the Best Player award.

Four years later, the Bournemouth star is one of Wales' most talented players and has been courted by Manchester United in the past.

Born and raised in Kingston upon Hull, James qualifies for Wales through his late father – who tragically lost his life three weeks before he signed for United.

The pacy winger might be a Yorkshireman but has spent much of his life across the border where he played for Swansea.

Who will win the Euros this year? Who has surprised you so far? Leave your comments below.

Not far from Wales is the birthplace of Smith, Manchester City youngster, who was born in Redditch, Worcestershire.

Spells with Twente, Charlton, QPR and Doncaster Rovers have been enough to impress Page, while the 21-year-old qualifies through his grandfather.

The Leeds striker played for England at schoolboy level before switching allegiance through his Welsh grandparents.

Born on the other side of the Severn, Roberts grew up in Gloucester before signing for West Brom as a youngster.

Probably the most remarkable story of the lot, Moore was born in Torquay, Devon while spending much of his career in non-league, including a year in Norway with Viking.

His grandad is Welsh which led to his eventual international call-up but China tried to convince the striker to join up with them through his maternal great-grandfather, who came from Guangdong.

Moore even travelled to Beijing to discuss further in 2019 but the Cardiff City star ended up sticking with Wales.