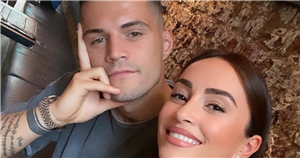 Granit Xhaka will hope to shine for Switzerland at Euro 2020, but he will always be the apple in the eye of his wife Leonita Lekaj.

Arsenal star Xhaka and Leonita have two children, with the second daughter arriving in April.

Leonita often posts adoring snaps of the couple on her social media, where she boasts almost 200k Instagram followers.

Xhaka and Leonita have been together since meeting during the midfielder's time at Bundesliga club Borussia Monchengladbach in 2015.

She was born in Albania and was raised in Pristina, Kosovo. However her family moved to the Ruhr region of Germany as Leonita grew older.

Xhaka has been linked with a move away from Arsenal this summer with Serie A giants Roma believed to be keen.

Xhaka has had a mixed spell at the Gunners with his wife previously locking her Instagram account after appalling death threats.

Apart from the pictures on social media, the pair seem to remain quiet over their private lives.

On Xhaka's birthday last September, Leonita posted a series of photos of the star with a loving message.

How far can Switzerland go at Euro 2020? Let us know your thoughts in the comments section

It read: "Happy birthday to the love of my life!

"I'm so happy to have you in my life, as long as I have you by my side I know anything is possible."

Despite Xhaka's Arsenal future being up in the air, the midfielder is determined to focus on the European Championships.

He said: “There are always rumours as soon as the transfer market opens but I don’t want to talk about my future.

“I am 100 per cent focused here with the national team and I want to keep that until the end of the tournament.

“What happens afterwards, you will then get to know about it. Everything else doesn’t distract me.

“I am fit and motivated and looking forward to doing a lot of things in this tournament for the team.”