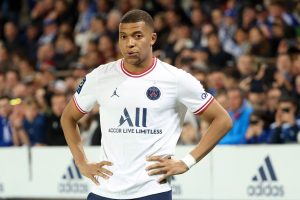 Kylian Mbappe has been trolled by fans for his “loser mentality” after reports emerged that he had decided to stay put at Paris Saint-Germain, rather than join Real Madrid.

Mbappe’s future has been the subject of ongoing speculation all season, with his current PSG deal set to expire on July 1. Real have publicly pursued the young striker for years and, after being rebuffed last summer, looked like favourites to finally get his signature ahead of the 2022/23 season.

However, French newspaperLe Parisienreported on Thursday that Mbappe had agreed in principle to sign a new two-year contract extension with PSG. Mbappe would reportedly earn £42.5million (€50m) a year and receive a mouth-watering £85m (€100m) signing-on bonus.

To many, the news looked at odds with recent events in the Champions League – with Real in the final after knocking out PSG in the last-16. Mbappe has won four Ligue 1 titles and plenty of other domestic trophies since joining PSG from Monaco in 2018, but the Champions League has eluded him.

The Paris club lost the 2020 final to Bayern Munich and Mbappe’s apparent decision to stay, instead of switching to Real – who have won a record 13 Champions League titles, including four of the last eight available – was slammed by fans on Twitter.

HAVE YOUR SAY! Should Kylian Mbappe stay with PSG or move to Real Madrid? Comment below.

“This dude has no ambition looooool,” commented one supporter. “He’s ducking the lights,” added another. “It’s weird how 2 clubs who were linked with him are in a ucl final now and he decides to stay at psg who still can’t win a ucl,” wrote another. “If true he’s wasting another 2 years of what could be an amazing career,” concluded another.

Despite the condemnation, the Mbappe saga is far from finished, with the 23-year-old’s mother releasing a statement late on Thursday to deny he has made up his mind. Fayza Lamari said: "There is no agreement in principle with Paris Saint-Germain or any other club. Discussions around Kylian's future continue in great serenity to allow him to make the best choice, in the respect of all the parties."

With so much money at stake – and his current contract taking him up to June 30 – it seems likely Mbappe will drag his feet for a little longer.