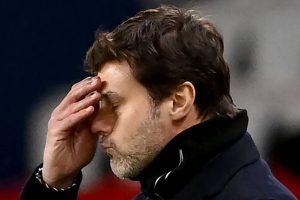 PSG have become accustomed to dominating the French top flight in recent years.

But the Ligue 1 giants may not have it their way on Sunday evening as they battle it out for the 2020/21 title.

PSG head into the final day in second-place, one point behind Lille and two ahead of Monaco, with both sides hoping to spoil the Parisian party.

And for Mauricio Pochettino, it could be a day to forget as he bids to continue his side's fine record in the league in recent years.

Only once since 2013 have PSG missed out on the title, with Monaco lifting the prize back in 2017.

The Parc des Princes outfit finished eight points behind their rivals with Unai Emery in charge back then.

But PSG have had it their way since, strolling to title after title thanks to the likes of Neymar, Kylian Mbappe and Edinson Cavani in years gone by.

Today, however, the power is firmly in Lille's hands.

Les Dogues head to the Stade Raymond-Kopa to tackle injury-hit Angers, who currently sit in 12th-place after losing four of their last five league games.

A win for Lille guarantees them their first Ligue 1 title since 2011 – but as long as they match PSG's result they will fend off Pochettino's side.

It is slightly trickier for Monaco to land the title, however.

Niko Kovac's side travel to Lens knowing they must beat the sixth-place side, while hoping PSG and Lille both lose.

They would also need to overcome Lille's goal difference given that they are three points behind the league leaders at present.

But Monaco could also miss out on the Champions League this evening.

Fourth-place Lyon are just four points off the top and one behind Monaco, meaning a win or even a draw could see them secure a top-three finish.

Pochettino secured the first silverware of his professional managerial career earlier this week as PSG scooped the Coupe de France after beating Monaco 2-0 in the final.