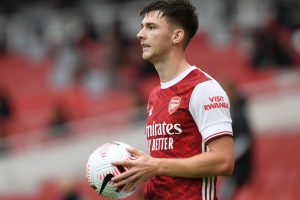 Leith boss Jack Ross has moved to solve his goalkeeping crisis ahead of Monday’s trip to Celtic Park by signing former Gunners understudy Macey on a six-month deal.

Ross was forced to act quick after QPR recalled Dillon Barnes this week. With regular Hibs number one Ofir Marciano injured, the Hibs boss feared he may have to hand goalkeeping coach Craig Samson his comeback at Parkhead two years on from his last first-team outing.

Thankfully, giant 6ft 7in keeper Macey has come to the rescue for the Edinburgh side, with the 26-year-old revealing he was sold on the Easter Road switch by former Hoops ace Tierney, who now stars for Mikel Arteta’s Arsenal.

Macey can now expect a baptism of fire as he looks to make his debut against Neil Lennon’s men. But he admits Tierney might not be so enthusiastic if he shuts out his beloved boyhood heroes.

Speaking to Hibernian’s official website, he said: “I spoke to Kieran Tierney at length about the opportunity to come to Hibs, about Scottish football and the country in general.

“Kieran was really positive about every aspect of it, whether it was the club or Edinburgh itself. As I said, I was already keen to come but it was good to hear him talk so enthusiastically about it all. He backed up the gut feeling I had.

“Kieran’s someone I have a lot of time for and he’s probably one of the first names on the team-sheet – if not the first – at Arsenal just now.

“Facing Celtic on Monday would be a great one to start with. It’s already come up in conversation with Kieran. He isn’t exactly subtle about the team he supports so I think the well-wishes from him would last until kick-off. Personally, it would be an exciting game to be involved in. I’m fit and raring to go.”

Macey spent seven years at the Emirates but registered just two first-team appearances for Arsenal. He had loan spells at Accrington, Luton and Plymouth but has not played a first-team match for 18 months and now believes the time is right to cut his ties with the north London club.

He said: “I really enjoyed my time at Arsenal, but this feels like an opportunity that I’ve been waiting for. I want to kick-start my career.

“The last few years haven’t gone the way I would have planned, but that’s always the trade-off when you’re at a massive club with world-class players. It’s an opportunity to play in games that matter and the thought of that is really exciting.

“Arsenal gave me a great education and I’ve had the chance to work with some amazing coaches and players. I had some incredible experiences, especially on the road for some big games.

“You also get plenty of practice in training trying to save shots from some world-class attackers. Pierre-Emerick Aubameyang sticks out. He has a real killer instinct. In some sessions it can feel like a bonus just to save one or two of his shots.

“When I was younger I was a bit more starstruck by it but there comes a point when you want to make an impact yourself. I feel like I’m at a point when I really want to be playing games.

“I had a good chat with the gaffer and Craig Samson. It was all very positive. It feels like a great fit for me.

“They really didn’t have to sell the club to me. They were honest about the club and what they want to achieve here. It sounded like something I really want to be part of – a team that wants to challenge for silverware and qualify for European football.”