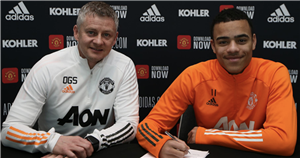 Mason Greenwood is still a fair way off being Manchester United’s top earner despite signing a new contract with the Red Devils.

The 19-year-old penned a new deal that keeps him tied down at Old Trafford until 2025, with the option of an extra year.

Greenwood has impressed at United having burst onto the scene as a youngster and has already made 82 appearances for the club.

He was believed to be earning £35,000 per week on his previous deal and is now reportedly earning more than double that.

Though his £75,000 per week earnings are still a long way behind team-mates such as David de Gea, Paul Pogba and Anthony Martial.

Though Greenwood is just pleased to put pen to paper, saying: “When you join the club at seven years old, you just dream of playing for the first-team one day.

“I’ve worked so hard to reach this level and the last two years have been amazing. There is so much that I want to achieve in the game and I know that this is the perfect environment to play my football.

“There is a lot more to come from myself and this team and I am so committed to working hard week in, week out to help the group achieve success.