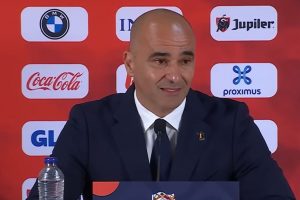 Belgium boss Roberto Martinez has backed Eden Hazard to finally show the form that convinced Real Madrid to sign him three years ago.

Hazard became one of the most expensive players in Madrid's history when they bought him from Chelsea. But frequent injury issues and inconsistent performances have seen him slip down the pecking order at the Bernabeu.

He made just seven starts in La Liga last season, failing to score a goal and notching just one assist. Manager Carlo Ancelotti increasingly left him on the bench, also selecting Hazard to start just one Champions League game, the defeat to Sheriff in the group stages.

There were some suggestions that Madrid could look to move him out on loan this summer, though his astronomical wages means that finding a suitor is proving difficult. He still has two years to run on his contract in the Spanish capital and badly needs to finally show his worth.

Despite his struggles in Madrid, he has continued to be selected by Martinez for the Belgian national team. And the man in charge of Les Diables Rouges firmly believes that Hazard will come good next season.

"Eden Hazard is in the best period of his career. I was surprised by the state of mind and physical condition he was in in June. Real Madrid fans are going to see a totally different Hazard," Martinez told radio programme El Larguero.

Do you think Eden Hazard will finally repay Real Madrid's record transfer fee? Let us know in the comments section below

"He is obsessed with succeeding at Real Madrid. He has not thought about changing his objective. He wants to win the World Cup. When you have a player capable of making a difference, whatever happens, it's going to be positive."

The winger is set to be handed a chance to prove himself in the Spanish capital, at least over pre-season. Ancelotti made it clear that Hazard would be staying in Madrid for the upcoming campaign.

"His plan is quite clear. He stays. He has a lot of motivation because he hasn't had a good time these last few years and he wants to show all of his quality, which for many reasons he hasn't been able to do," Ancelotti said.