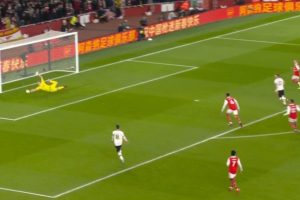 Martin Tyler has come in for criticism after his commentary of Marcus Rashford's superb opener for Manchester United against Arsenal was compared to Antiques Roadshow.

Tyler was the subject of moans and groans from fans last week after he was adjudged to have underplayed Martin Odegaard's second goal against Tottenham. And he received more negative comments for his reaction to Rashford's brilliant effort at the Emirates.

Rashford opened the scoring at the Emirates with a fierce strike from outside the box that flew past Arsenal stopper Aaron Ramsdale and into the bottom corner. But some supporters felt Tyler's commentary didn't match the moment.

The veteran caller yelled: "Oooooh, what a goal" as Rashford's effort hit the back of the net, before adding: "Well, wipe away all those statistics about never scoring here, he's just put that to bed."

However, that didn't please social media users, one of whom begged him to retire. One wrote: "Martin Tyler is the best to ever do it and it will be strange watching big games without him, but he has to hang the mic up. Absolutely phenomenal goal by Rashford in the biggest game of the season and he sounds like he’s narrating the Antiques Roadshow."

What do you make of Martin Tyler's commentary? Let us know in the comments section

Someone else said: "Sky need to sack Martin Tyler, if he isn’t creaming over every single thing United do he’s sounding drier than a nun's p****…"

A third user added: "Can’t wait for Martin Tyler to retire, just sounds bored when commentating games for the past few years." While another commented: "Time to pack it in, Martin Tyler, you can’t even get excited for a United goal."

Arsenal fans offered a similar judgement following Eddie Nketiah's header, perhaps suggesting that Tyler is doing something right after all. One wrote: "Martin Tyler couldn't have sounded less enthralled about that Arsenal goal if he tried. Even Gary Neville sounded more excited.

As another said: "Gary Neville and Martin Tyler are commentating for the second week in a row on Arsenal and they twerking for a United victory."

Nketiah's header ensured the sides went in 1-1 at the break after an enthralling first half.