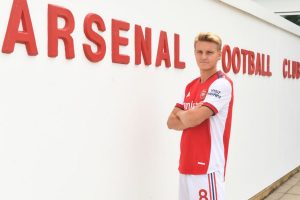 Arsenal have completed the £30m signing of Martin Odegaard from Real Madrid on a five-year contract.

The attacking midfielder spent the second half of last season on loan in north London, making 14 appearances in the Premier League, and Mikel Arteta had made it a priority to secure the Norwegian on a permanent deal.

A deal proved difficult to negotiate at the start of the window, though, with Real Madrid’s refusing to budge on their valuation. Arsenal were forced to consider other targets and bid for Emiliano Buendia earlier in the window, but with Madrid needing to generate funds from player sales, Odegaard was recently left out of their La Liga squad by Carlo Ancelotti and talks were reignited with Arsenal.

Arsenal have confirmed that Odegaard will not be available to face Chelsea this Sunday due to a delay waiting for visa clearance. He will wear the No 8 shirt.

Odegaard, who joined Madrid at as a 16-year-old in 2015, only made 11 appearances for the first team, spending the majority of his time on loan, with spells at Heerenveen, Vitesse Arnhem and Real Sociedad before Arsenal.