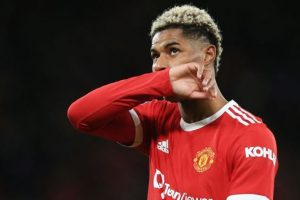 Marcus Rashford’s opinion on Manchester United’s appointment of Ralf Rangnick has emerged as the striker struggles for form. Rangnick was appointed on an interim basis in November but has so far struggled to get the best out of Rashford.

The 24-year-old forward drew another blank in United’s 1-0 FA Cup victory over Aston Villa, taking his goalless run to 11 matches. It is his longest spell with a goal since 2016.

Rashford initially started the season well after returning from back surgery in October.

He scored three goals in his first four appearances but has now not found the net since the 3-0 win against Tottenham on October 30, which helped to prolong Ole Gunnar Solskjaer’s reign.

Further poor performances under the Norwegian prompted his sacking on November 21.

United moved quickly to appoint former RB Leipzig head coach Rangnick on a deal until the end of the season but Rashford is yet to score under the German.

And now, Rashford’s view on Rangnick has been reported.

According to The Athletic, the England international was ‘enthused’ by the arrival of the 63-year-old but has struggled to gain consistency due to the change in formation.

Solskjaer usually opted for a 4-3-3 or a 4-2-3-1 formation during his three years in charge. The 48-year-old also used a back five on occasion.

Rashford’s form has worried supporters and will need improvement if he is to secure a place on the plane to the World Cup at the end of the year.

His dip in form appears to have coincided with his underwhelming Euro 2020. Rashford played in just 72 minutes for the Three Lions and missed a penalty during the shootout against Italy during the tournament finale.

United icon Dimitar Berbatov has encouraged the academy graduate to lean on Cristiano Ronaldo and Edinson Cavani for advice.

“It’s important that the manager, the staff and team-mates are giving Rashford these little boosts,” the Bulgarian wrote in the Sun.

“They have some incredible people at the club, he should speak to Cristiano Ronaldo and ask him for advice.

“I didn’t speak to any of my team-mates when I was on a bad run, I was shy and quite private. That was my mistake.

“If there’s someone in the team who is experienced and is an icon in world football, like Ronaldo then go and ask him for advice, I’m sure he will give people time and wise words.

“Edinson Cavani brings goals wherever he goes, he should speak to him too. Don’t be like me, talk to team-mates, because that cycle of bad form can go on and on.