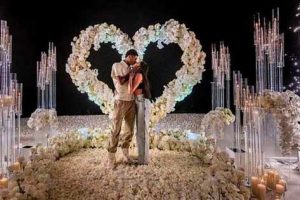 Marcus Rashford has got engaged to childhood sweetheart Lucia Loi after proposing in Hollywood.

The Manchester United star got down on one knee and popped the question on Tuesday (May 24) during their romantic trip to the States. He and PR executive Lucia have today announced their engagement with a joint post on Instagram.

The pair had flown to Los Angeles straight after United's season finale at Crystal Palace on Sunday, which ended in a 1-0 defeat thanks to Wilfried Zaha's goal. They are believed to have dined at celebrity seafood restaurant Catch LA before Rashford made her his fiancee.

A source told The Sun: “They’re over the moon. Marcus has been planning this for a while and wanted to make it special.

"They went out in LA for a romantic night together on Tuesday and he proposed there and then. It was extremely romantic. They celebrated afterwards with a group of close friends — including his Manchester United teammate Jesse Lingard.”

Rashford and Lucia, both 24, met at Ashton on Mersey School, in Sale, Greater Manchester when they were aged 15. However, they broke up after eight years together last May.

Rashford was said to be devastated by the break up which had come about due to the pressures of lockdown. Their split didn't last long, though, with their relationship rekindled in January this year.

And now they appear to be stronger than ever with a wedding on the horizon. The news comes after Rashford learned he was not included in Gareth Southgate's England squad for the upcoming Nations League fixtures.

He started just 13 Premier League games over the course of the 2021/22 campaign, struggling after his return from shoulder surgery. According to The Telegraph, he wants to stay at United and fight for his place under new boss Erik ten Hag.

So once his holidays are over he will undergo an "intense" warm-weather training camp before returning for pre-season at Carrington on June 27.