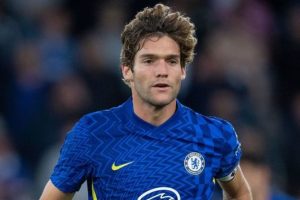 Marcos Alonso was left out of the Chelsea squad to face Arsenal in their latest pre-season friendly this afternoon amid speculation he could be used in a potential swap deal for Sevilla centre-back Jules Kounde. The Blues are currently in talks to sign the Frenchman but they are yet to strike a deal with the La Liga outfit for the 22-year-old despite starting talks at the beginning of the week.

Kounde was left on the bench for the entirety of Sevilla’s latest friendly against Roma yesterday.

Reports in Spain claim the decision was linked to his future and a potential move to Chelsea.

It’s believed that Sevilla did not want Kounde to pick up an injury in case it puts the transfer at risk.

Chelsea are said to have offered Sevilla both Emerson Palmieri and Kurt Zouma during talks with Sevilla.

JUST IN: Chelsea stance on including Andreas Christensen in Jules Kounde swap deal with Sevilla

However, both players are unlikely to move to the Ramon Sanchez Pizjuan and Sevilla prefer a straight cash deal.

Emerson prefers a return to Italy and was not of interest but he could still depart Stamford Bridge before the season starts.

Meanwhile, Zouma – who started for Chelsea today – has allegedly decided that he would prefer to stay in London with West Ham willing to pay around £20million for his services.

There was a fresh development this afternoon though as left-wing-back Alonso was left out of the Chelsea squad to face the Gunners in north London.

Several Chelsea news accounts on Twitter reported that Alonso was expected to be absent last night.

The club are yet to confirm the reasons behind his mysterious omission.

Yet it’s understood Sevilla would be keen on adding Alonso to their squad, should the opportunity arise.

He was a target for the club last summer before he eventually stayed put in west London.

His playing time has since dwindled following the capture of Ben Chilwell from Leicester a year ago.

It’s believed he wants to see his son follow in his footsteps and pull on the famous shirt in Andalusia.

The 30-year-old has featured regularly in pre-season and even captained Thomas Tuchel’s side in the midweek win at Bournemouth.

Callum Hudson-Odoi started in place of him today at left wing-back as Chelsea supporters patiently wait to gain clarity on the player’s absence.