Chelsea coach Marco Ianni was charged with improper conduct for sparking a scuffle with Manchester United boss Jose Mourinho, and the Italian may face further action after it emerged he should not even have been in the technical area.

The incident also led the Football Association to remind Mourinho of his responsibilities as manager.

The Manchester United boss was enraged at the way Ianni celebrated Ross Barkley’s stoppage-time equaliser in the 2-2 draw on Saturday, causing a melee in the tunnel and among players.

WHO IS MARCO IANNI?

He followed Maurizio Sarri from Napoli to the Premier League this summer, having spent two years as a technical assistant at the Serie A side.

Ianni forms part of Sarri’s 10-man strong backroom staff. Along with club legend Gianfranco Zola, he is one of two assistant first-team coaches.

In Italy he was known as one of the four ‘wizards’ credited with being the brains behind Sarri’s Napoli, with a focus on tactics.

He was born in 1982 and enjoyed a playing career in the lower leagues of Italian football as a defensive midfielder.

He spent most of his days at Sambenedettese, a club on Italy’s east coast, who currently play in Serie C.

He retired at the age of 32, immediately turning his attention to coaching at Serie D side Citta di Campobasso before making the move to Naples.

Ianni also breached further instructions, as Premier League rules state clubs must inform them of the six backroom staff who will be on the front row of the bench.

As Ianni came from several rows back, he was not one of those nominated to use the technical area.

The FA take encroachment into that zone by unauthorised personnel seriously and Ianni faces a hefty fine and also a ban from the area near the Chelsea bench.

The United manager received an apology from both Ianni and opposite number Sarri and said he considers the matter closed, but the FA has now opened disciplinary proceedings.

The the governing body said in a statement: ‘Chelsea coach Marco Ianni has been charged following the game against Manchester United on Saturday.

‘It is alleged that his behaviour in the 96th minute constituted improper conduct. He has until 6pm on Thursday 25 October 2018 to respond to the charge.

‘In relation to this incident, Jose Mourinho has been formally reminded of his responsibilities whilst both clubs have received similar official reminders in terms of the behaviour expected of their staff and players at all times whilst in the technical area.’

Mourinho launched an unexpected defence of Ianni ahead of Tuesday’s Champions League clash with Juventus after England Women manager Phil Neville called for the ‘absolutely disgraceful’ behaviour to see the Italian sacked.

‘But I’m not happy that it’s going too far with the young boy. I don’t think he deserves more than what he got.

‘He apologised to me, I accept his apologies. I think he deserves a second chance.

‘So, I I hope everybody does the same as I did which is to not disturb the career of a young guy, which is probably a great guy, probably is a coach with great potential. 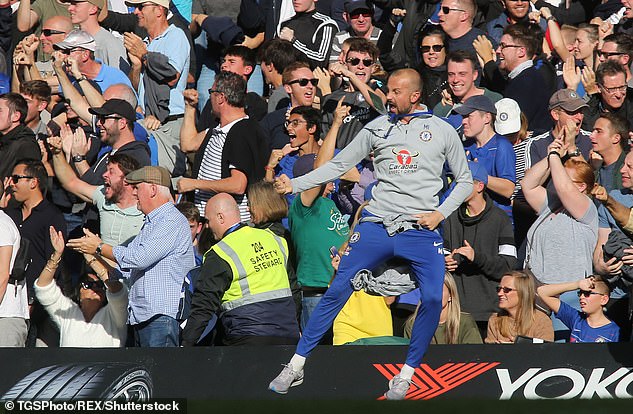 ‘And I’m not happy at all with more than that. End of story. With me, it’s the end of the story in the minute he apologised to me.

‘I would really like the boy not to go through more than that, let him work. Everybody makes mistakes, I made a lot of mistakes, so I hope they let the kid go on.’

Mourinho does not face any further FA action for that incident, but the United manager is preparing to answer a charge of using abusive, insulting or improper language following the 3-2 victory over Newcastle.

The Portuguese spoke into a camera in his mother tongue after his side came from behind before the international break and has until Wednesday to respond, having been granted an extension. Mourinho could potentially face a domestic touchline ban.