In the end, Ole Gunnar Solskjaer was pleased with the result, but it was close to being less than satisfactory.

Marcus Rashford’s sublime goal after half an hour, made possible by an equally magnificent Victor Lindelof pass, gave Manchester United a lead that they never looked like relinquishing against Granada.

This is the Andalusian club’s first-ever European campaign, coming two years after their promotion from the Segunda and a decade-and-a-half since their days in Spain’s lowly fourth tier.

Though cheered into the Nuevo Los Carmenes by a cavalcade of supporters, they looked like a team caught up in the occasion when finally on the pitch, even after overcoming Napoli and Molde, Solskjaer’s former club, to progress this far.

United were about as comfortable as it is possible to be at this late stage of a major European competition but could not press home their advantage. And frustratingly, while goals were hard to come by, bookings were not.

There were five for United in total. Paul Pogba received the first as early as the eighth minute for a late lunge on Kenedy after losing the ball. Nemanja Matic was shown the last, not long after coming on as a late substitute. Neither yellow card was particularly significant, though.

It was the other three for Scott McTominay, Luke Shaw and Harry Maguire that Solskjaer was most peeved with. All three players will miss next week’s return leg at Old Trafford. 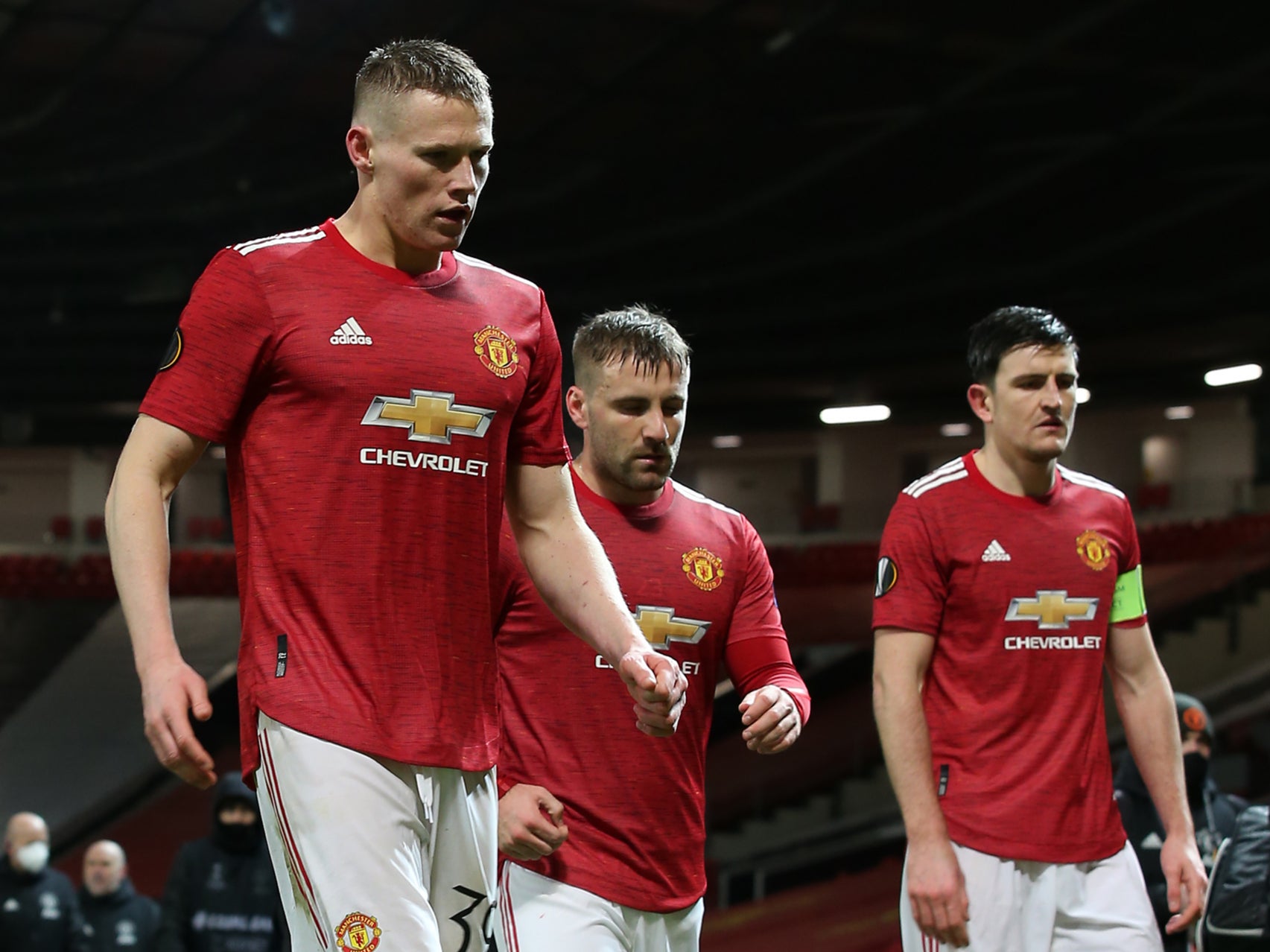 Fortunately, Bruno Fernandes’ late penalty gave the scoreline a more accurate reflection of United’s dominance. It means that Solskjaer has more room to manoeuvre when it comes to rotating his squad.

“It was an important goal, the second one there. A 1-0 lead losing three players is not a good position to be in,” the United manager said afterwards.

“I don’t think we deserved those yellow cards but that’s happened.”

The suggestion was that if only a single goal up and without Maguire, McTominay and Shaw, he would have had to name another strong line-up for the second leg. Fernandes’ spot-kick will have rested a few hamstrings then, but so too have the suspensions.

This was Maguire’s 45th appearance of the season already and 44th start. Another 90 minutes in the tank puts him on 4,126 for the campaign across all competitions, the most of any player at Old Trafford and indeed across the Premier League.

Maguire is used to such a heavy workload. During 2020, he officially spent more time on the pitch than any other elite footballer in the world, clocking up a staggering 5,105 minutes. Fernandes, for what it is worth, was not far behind.

While it has become familiar to hear Maguire say he will “rest when he retires”, a midweek off will not hurt. His last night off was for the second leg against Real Sociedad in February. Before that, he was named among the substitutes for the FA Cup third-round win over Watford, only to be called upon at half-time after an injury to Eric Bailly.

With Bailly now unavailable once more after testing positive for Covid-19, Axel Tuanzebe can be expected to step in and replace Maguire at the heart of the defence next Thursday. He is one of several back-up players in United’s ranks who deserve more opportunities to impress.

McTominay has reasonable competition and depth around him, meaning he has some way to go before matching Maguire’s volume of minutes, but a break between games next week will certainly help Shaw.

The left-back is in the form of his United career but was removed at half-time for Alex Telles, with Solskjaer later speaking of a need to “protect” him.

Whenever Shaw’s career has appeared to be back on track, an unfortunate setback has never seemed to be far around the corner. His manager did not divulge the specific problem he had to manage but hinted at an issue, albeit one that should not keep him out of Sunday’s trip to Tottenham.

What with Rashford’s well-publicised fitness issues to also consider, and two away goals in the coach’s back pocket, next week presents Solskjaer with an opportunity to manage his squad and freshen things up. The suspensions may even be a blessing in disguise.

On the evidence of this comfortable first-leg win, against a decidedly mediocre Granada, even a weakened United line-up should have enough to see this tie out.