Manchester United are in Monday night action for the Europa League quarter-final as they take on Copenhagen for a place in the semi-finals.

Ole Gunnar Solskjaer’s side breezed past LASK in the last round with a 7-1 victory on aggregate. The Red Devils are heavy favourites to make it to the final four, as they face a Copenhagen side who knocked out Turkish Superlig champions Istanbul Basaksehir in the Round of 16.

Meanwhile, two potential favourites to win the Europa League battle it out as Inter Milan face Bayer Leverkusen. The Serie A side are in red hot form losing just one of their last 15 competitive matches whilst Leverkusen comfortably beat Rangers to earn their place in the final eight.

Manchester United’s pursuit of Jadon Sancho this summer appears all-but over after Borussia Dortmund insisted the England international will play for the Bundesliga giants next season.

The RheinEnergieStadion in Cologne will host United’s quarter-final clash with Copenhagen.

Meanwhile, approximately 30.5 miles down the road the Serie A and Bundesliga clubs will showdown at the Merkur Spiel-Arena in Dusseldorf. 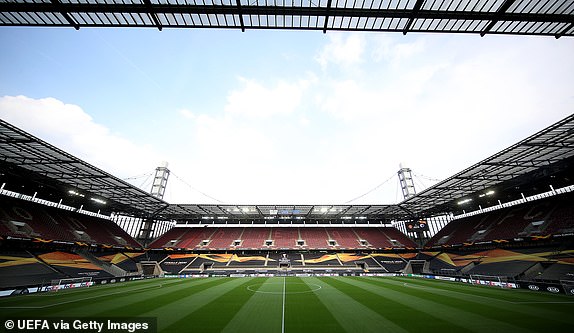 Hello and welcome to Sportsmail’s evening coverage of the Europa League. Stay tuned for full build-up and commentary as Manchester United play Copenhagen as well as updates from Inter Milan vs Bayer Leverkusen.

Tennis: Wimbledon to take place in 2021 even without fans, Times reports