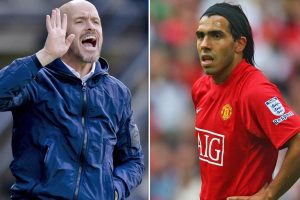 Manchester United want to sign a modern striker to mark the beginning of the Erik ten Hag era this summer. And, in Inter Milan’s Lautaro Martinez, the Red Devils may be about to secure the signing of a modern-day Carlos Tevez. The Argentine workhorse has an eye for goal and has developed into one of the best strikers on the planet during his time at the San Siro.

“Cristiano is not a central striker or does not want to play in that position,” said Rangnick.

“It’s obvious that the club needs, I would say, at least, two new strikers who just give this team more quality and more options. I wouldn’t even call it wingers.

“Two strikers and modern strikers, that do not necessarily have to be wingers.

“If you look into international football, there are not that many top teams who still play with two strikers.

“Most of the international top teams play with either three strikers or with a false nine.”

And Martinez seems to be only of the players on United’s radar as they look to acquire a new marksman in this summer’s transfer window.

Last weekend, reports claimed the Red Devils had attempted to use a swap deal involving Anthony Martial in order to land the player.

However, their bid failed with Inter making it clear they want cash only to let their prized asset go.

Since then, it’s emerged that it will take a fee of around £60million to £70m to convince the Serie A giants into selling up.

And if United are able to bring Martinez to Old Trafford, then it’s possible he’ll become the club’s modern-day version of Tevez.

Back in 2007, the striker was a wanted man after dazzling for West Ham – helping them avoid relegation on the final day of the season.

And United, despite already having Ronaldo, Wayne Rooney and Louis Saha at their disposal, decided to act.

Tevez wasn’t the deadliest player at United, scoring 19 goals during his first season and 15 the following year.

But he won support due to his tenacity, with the Argentine often throwing himself around the pitch without holding back.

Martinez, at Inter, is a similar type of player.

He was able to be selfless when Romelu Lukaku was at the San Siro, adjusting his game accordingly to help the Belgian take the spotlight.

And the 24-year-old has operated in a similar role this year, tailoring his performances to maximise the impact of summer signing Edin Dzeko.

As an Argentine with an eye for goal – he’s scored 18 times across all competitions this season – and the willingness to press and run around the field, Martinez could be United’s new Tevez.

And comparisons haven’t escaped their former No 32, who previously admitted Martinez had a resemblance to himself.

Under Ten Hag, United will want to hit the ground running.

And spending £60m to £70m on one of European football’s biggest talents would certainly represent an exciting start.

Meanwhile, speaking earlier in the season, Martinez’s agent Alejandro Camano has said that the South American is not looking to leave San Siro.

“No, he’s very happy at Inter,” Camano told FCInter1908 when asked whether his client is keen to move clubs.

As well as United, Arsenal and Tottenham have also been linked with Martinez.

And what ultimately happens remains to be seen.