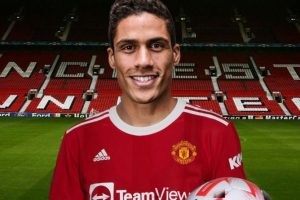 Manchester United are poised to welcome a host of stars for first-team training today. And they’re also primed to complete a deal for Raphael Varane, with the Real Madrid star jetting into the city. With his unveiling due, it’s also possible his shirt number will be revealed as well.

Manchester United have enjoyed a positive start to the summer transfer window so far.

Tom Heaton and Jadon Sancho have both joined, touching down from Aston Villa and Borussia Dortmund respectively.

And United also have an agreement in principle when it comes to Varane, who is due to jet in today to undergo his medical.

Once that’s done, with the player now in the country and at Carrington, United are then set to formally unveil him.

Fans can expect Varane to talk about his decision to leave Real Madrid behind after 10 years in sunny Spain.

They can also expect Ole Gunnar Solskjaer to be pictured alongside the 28-year-old grinning, while talking about his own decision to land the player.

And it’s also possible that United will announce the defender’s shirt number today, too.

Varane will start training with his new team-mates soon. And when he’s sporting their training gear, his jersey will become apparent.

So, therefore, it’s possible United won’t choose to wait. After all, Varane shirts will sell quickly in the club’s megastore and online. Why wait?

At the moment, there are several possibilities when it comes to his shirt number.

United could give him the No 4, especially with Phil Jones expected to leave. The Red Devils are willing to let the England international go for free in order to get him off the wage bill.

Andreas Pereira is expected to be sold this summer, despite his wonderful goal against Brentford recently. Fenerbahce are in the mix for the Brazil international and Solskjaer is unlikely to stand in his way given the midfield options he has at his disposal.

It was a number sported by Nemanja Vidic during his time at the club – and the Red Devils would love it if Varane can be half as successful as the Serbia international was.

The No 16 is another possibility as well.

Previously worn by Michael Carrick and Roy Keane, it’s a special number over at United.

And it’s possible that Varane’s shirt number will be known to the world by the end of the day, especially if the club make everything official with an announcement.

Solskjaer has already broken his silence on the Real Madrid star, praising his imminent recruit after the draw with Brentford last week.

“Sir Alex was very close to signing him,” he said.

“This time around, we’ve got him at the other end of his career.

“He’s proved over his old career, what a good person he is, professional and he’s won what there is to win.

“From what I know, the club is working on the quickest possible solution to get everything sorted [for the medical]. I don’t know the timescale yet, there’s a visa coming into England now with Brexit and quarantining, everything has to be done as quickly as possible and by the book.

“As I’ve said before, every manager would be happy the sooner and the earlier the deals are done. This year we’ve managed to get it sorted, the two we’ve got in will make a huge difference for us, both this season, short-term, but also long-term.”

Patrice Evra, meanwhile, thinks Varane can be like Rio Ferdinand for United.

Speaking to The Athletic, Evra said: “Varane reminds me of Rio Ferdinand.

“Great with the ball, great in the air. He’s the complete centre-back. I remember his first game with the French national team and I was so impressed.

“He was so young yet so good with the ball, so fast and his anticipation was perfect. He’s calm with the ball and he can score too.