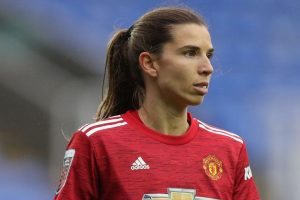 Manchester United forward Tobin Heath believes the club joining the Women’s Super League has been a “game-changer” for the women’s game in England.

United earned promotion to the WSL in 2019 just one year after forming, with Casey Stoney’s side winning 18 of their 20 games in the Women’s Championship.

Last season’s curtailed WSL season saw United finish fourth, but this campaign United sit third, six points behind leaders Chelsea and USA forward Heath, who signed for the club in September, insists a club of United’s stature having a successful women’s team can only be good for the game.

“Manchester United’s team is obviously relatively young, and I remember reading that they had a women’s team and I had actually told my team-mate, this is a game-changer,” Heath told The Official Manchester United Podcast.

“Such a massive club coming into the league is such a signal about the game over here and the change and the growth. That really interested me and it’s been a really fun time learning about the league and the way the badge is over here, is just immense.”

Heath, 32, who is currently injured, brings a wealth of footballing knowledge to the WSL, having been capped by the USA 169 times.

Her many honours include two World Cups and two Olympic Gold medals. Heath was also shortlisted for the 2019 Women’s Ballon d’Or, and she is more than happy to use her experience to help younger players at the club.

“I do believe in teaching and helping, I don’t want a player to go down a path that I’ve seen before that I know doesn’t work or when I see something where you can do better,” she added. “I love encouraging my team-mates, I love seeing them do something well for the first time and seeing them evolve.

“Even in my short time here, I’ve seen so many players evolve so much, which is such a cool feeling, when you’re older I think you enjoy it more.

“For me, I always watched and studied the older players that I admired because I wanted to be just as successful, if not more, and I hope people are taking those little bits and enjoying that time.”