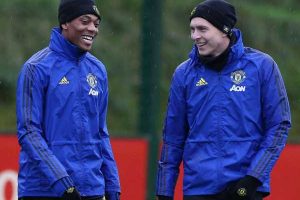 Victor Lindelof will be available to Manchester United for Sunday’s derby at the Etihad though Anthony Martial remains a doubt and Paul Pogba is out of contention.

Second-place United are hoping to close the 14-point gap between themselves and runaway leaders Manchester City by claiming their third successive win at the Etihad under Ole Gunnar Solskjaer.

The United manager will be able to call on Lindelof, who has played through the pain barrier with a back injury all season and was an unused substitute in Wednesday’s draw with Crystal Palace.

Martial was ruled out of the trip to Selhurst Park with a knee injury and remains a doubt, while Pogba is still waiting to return from a thigh problem suffered in last month’s draw with Everton.

“I’d believe at least Victor should be fine. He was on the bench,” Solskjaer said. “He was still feeling the effects of his back but hopefully he’ll be OK. Martial maybe. I probably wouldn’t see Paul being ready, no”

United will also be unable to call upon David de Gea, who has been granted leave to attend the birth of his first child to partner Edurne Garcia in his native Spain.

Juan Mata remains out of action with an injury picked up in late February, while Phil Jones is a long-term absentee.

On De Gea, Solskjaer said: “He has to go home and in the old world that’s a day, and you go and come back in a day, but with the pandemic and with the quarantines it’s a different world.

“When David wanted to go and be there to support his girlfriend, there’s not even a decision to make. Dean came in and played well, and he’s ready so I’ll give David the time he needs.”