Manchester United ‘had to learn’ how to win penalties, says Marcus Rashford 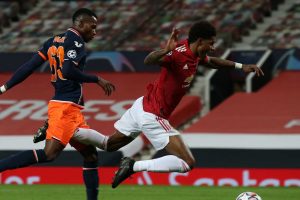 Marcus Rashford has said Manchester United “had to learn” how to win penalties over the course of recent seasons.

Liverpool coach Jurgen Klopp has been among those to note the number of penalties awarded to United this term and will be hoping his side don’t give away any when the rivals clash at Anfield on Sunday – with the Premier League’s top spot on the line.

Leaders United have won six penalties in the top flight this season, scoring five of them. Brighton have also been awarded six spot-kicks and scored five of them, while Leicester have received more than both the Red Devils and the Seagulls, netting eight of the 10 they have received.

But that has not stopped United – who have won 11 penalties across all competitions and scored 10 of them – from coming under criticism, both for their habit of winning spot-kicks and an alleged reliance on them.

And arguments around penalties are hardly absent from the club’s training sessions, Rashford admitted.

“It is worse in training than it is in games!” said the forward, who has taken and scored one of United’s spot kicks this season, with Bruno Fernandes the chief penalty-taker. “We are having arguments every day, shouting at whoever the referee is.

“As a forward line, we want to go and score goals, when you are making runs in behind or dribbling with the ball and if you see a challenge coming, you don’t want to get tackled, because you are looking at an opportunity to score a goal.

“There is no way you are going to let somebody take the ball off you, so for me it is just a case of us wanting to score goals and the teams wanting to defend goals – penalties can happen.

“There have been times when we have probably not got penalties. I remember when Jose [Mourinho] was manager, there were five or six times where I should have had a penalty and Jose ended up saying to me: ‘If you are not savvy about the way you do it, then you are not going to [get] it.’

“After that, we started to get a few penalties. It was something in terms of development, you have to learn that and understand it.”

United head to Anfield on 36 points, three clear of second-placed champions Liverpool, marking the first time since Sir Alex Ferguson departed Old Trafford in 2013 that the club has topped the table in January.