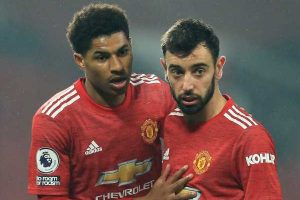 Ole Gunnar Solskjaer has defended his use of Bruno Fernandes and Marcus Rashford after they each played 45 minutes in Manchester United’s Europa League dead rubber against Real Sociedad.

Fernandes started Thursday night’s goalless draw and captained United, only to be replaced by Rashford at half time. Both players have more than 2,000 minutes under their belts this season.

United are about to embark on a run of three consecutive Premier League away games, starting with a trip to Thomas Tuchel’s Chelsea on Sunday and ending with a Manchester derby at the Etihad.

Solskjaer, however, does not want to give his two most important attacking players too much rest and believed 45 minutes on Thursday night was better than not playing at all.

“They are very, very fit, good athletes who recover well,” he said of Rashford and Fernandes.

“Normally they play every game so today I was very pleased to give them 45 minutes because 45 minutes on a Thursday is good preparation for a Sunday, definitely better than no minutes and then maybe you train too much.”

Solskjaer nevertheless admitted that United are about to embark on an important run of games, as they look to shore up their position in a top-four race which could go down to the wire.

“I think it’s going to be a long run in. I don’t think the positions will be decided early,” the United manager said.

“With this season it’s unpredictable. We’ve seen teams going through bad phases then a run and who knows what’s going to happen with injuries and how players react to circumstances.

Solskjaer added: “It’s still 38 games for every team, if you get a run good or bad it might impact you as a group and the culture.

“For us, bouncing back after a couple of setbacks we’ve had and going through now, it’s an important period. Our mentality is really good and we look forward to these game.

“We know Thomas has come in and it’s changed a little bit at Chelsea and it’s going to be a great challenge for us.”