Manchester City vs PSG prediction: How will Champions League fixture play out tonight? 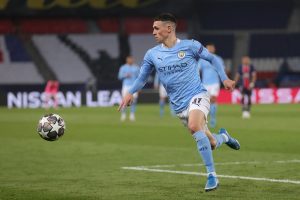 Manchester City will be hoping to replicate their second-half performance at the Parc des Prince last week as they look to finish Paris Saint-Germain off and advance to the club’s first Champions League final.

After struggling in the first half against PSG in last week’s semi-final first leg, City produced a remarkable comeback to take a one-goal lead into tonight’s second leg at the Etihad Stadium.

City manager Pep Guardiola is one game away from reaching his first Champions League final in 10 years but again faces a familiar foe in former Tottenham Hotspur boss Mauricio Pochettino, who knocked City out of the Champions League at the quarter-final stage at the Etihad Stadium in 2019.

Pochettino’s PSG lost their way in the second half of last week’s first leg, but showed in their first-half display that they are more than capable of reaching their second successive Champions League final.

Here’s all you need to now before the second leg tonight.

The match will be shown live on BT Sport 2, with coverage starting from 7:00pm. BT Sport subscribers can also watch on the BT Sport app and website.

Manchester City have no fresh injury concerns. Striker Sergio Aguero returned to the starting line-up against Crystal Palace on Saturday after he had been out with a knee injury.

Kylian Mbappe has been an injury doubt for the visitors after picking up a calf injury, but is expected to play after missing out of the side’s win over Lens on Saturday. Right-back Colin Dagba picked up an ankle injury against Lens but was not expected to play, with Idrissa Gueye is suspended after being shown a straight red card for a foul on Ilkay Gundogan last week.

Both sides gave us a glimpse of their strengths and weaknesses during the first leg, which leaves the decider finely poised. City have the advantage and will be able to play at their pace, while PSG will need Mbappe to have a greater impact than he did in Paris last week. The experience of coming through a difficult 45 minutes to get the win will do City the world of good, however, and they’ll be confident they have already survived the worst of what PSG have to offer. Manchester City 2-1 PSG (City win 4-2 on aggregate)