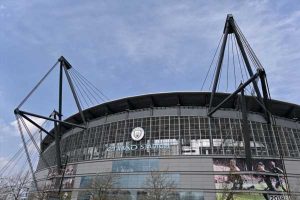 Man City are hoping to claim the title on home soil

Manchester City will be hoping to wrap up their Premier League title chase on Saturday, when they host Chelsea at the Etihad Stadium.

A win for Pep Guardiola’s side will see them crowned champions, though Thomas Tuchel’s side have plenty of reasons of their own to want to spoil the party.

It was the Blues who denied City the possibility of a quadruple this season after they won the FA Cup semi-final meeting between the teams recently – and they will have another big clash in the weeks ahead, after both reached the Champions League final.

In addition, Chelsea are still trying to secure themselves a top-four finish to ensure participation in next year’s competition – they can go third in the table if they take the points here, after Leicester’s shock home defeat to Newcastle on Friday night.

It might only be a matter of time until City lift the title anyway, but they’ll be keen to do it on home soil as well as gain a measure of revenge for the Wembley defeat.

Both sides and managers, meanwhile, will be aiming to gain any measure of upper hand in the mind games ahead of the European Cup final – whether that will be in Istanbul or elsewhere. Follow our live coverage of Man City vs Chelsea below.

The most important title

Expect Pep Guardiola to name a strong team for his side’s clash with Chelsea today as victory means they’ll pick up their second trophy of the season, with a possible third on the way. Having won almost everything with Manchester City Pep Guardiola is best suited to say which trophy means the most to the club. His answer:

Always I’ve said the Premier League is the most important title,

“Of course the Champions League is so special, it’s nice, but this one means consistency and many things.”

Man City and Chelsea have already met twice this season with another two games between the sides already booked in.

The first clash came in January this year when Frank Lampard’s Chelsea side hosted Man City at Stamford Bridge. The league leaders dominated from the start with three first half goals from Ilkay Gundogan, Phil Foden and Kevin De Bruyne enough to see them claim the three points.

Then came the FA Cup semi-final, Frank Lampard was replaced with Thomas Tuchel who shored up the Chelsea defence and gave them an attacking identity. Timo Werner’s pace setting up Hakim Ziyech for the only goal of the game.

Which leads us to today. If Man City win they’re the Premier League champions. As for Chelsea, three points will see them move up to third and put them one step closer to Champions League qualification next season.

One win from the title

Manchester City will lift the Premier League trophy today if they defeat Chelsea at the Etihad Stadium. Three points will be enough for Pep Guardiola’s men to win the top flight title for a third time in four years and the game is a precursor for the Champions League final later this month.

Welcome to the Independent’s live coverage of Manchester City vs Chelsea!