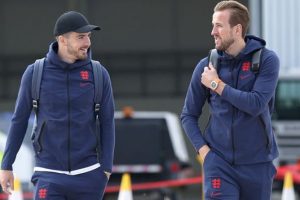 Manchester City want to limit deals for Jack Grealish and Harry Kane to a combined £200million this summer, according to reports. City submitted a £100m offer to Aston Villa earlier this week for their captain Jack Grealish. Reports have claimed Villa are set to accept the offer and a transfer could happen as early as next week.

City boss Pep Guardiola has made Grealish and Tottenham striker Kane his top targets in this window.

Kane told Spurs earlier this year he wanted to leave the club in search of winning major silverware.

Grealish has remained loyal to boyhood club Villa and signed a new contract as recently as last September.

But it appears increasingly likely the 25-year-old is on his way to the Premier League champions.

JUST IN: Sevilla prefer swap deal for Jules Kounde as Chelsea given ‘advantage’

A deal for Grealish is far more down the line than it is for Kane, who Spurs continue to say is not for sale.

Kane still has three years remaining on his Tottenham contract.

However, speaking on Reach PLC’s Transfer Window podcast, Duncan Castles says City will attempt to sign Kane for the same price they have offered Villa for Grealish.

“It is an extraordinary bit of business, unparalleled,” Castles said.

“The numbers you’re talking about are £100m for each player and that, I’ve been guided, is what Manchester City are trying to limit the fees to, and making it clear they would go to £100m for each of the players.

“Obviously Aston Villa will want more if they are forced to sell.”

Grealish’s fine season at Villa earned him a spot in Gareth Southgate’s England squad for Euro 2020.

He did not start as many games as he would have hoped for as the Three Lions lost in the final to Italy.

But former Manchester United star Rio Ferdinand has no doubts over Grealish’s talent.

And Ferdinand reckons City would be the right club to get the best out of him.

“There aren’t many breathtaking footballers around anymore who produce breathtaking moments,” he told the FIVE Youtube channel.

“He’s just a phenomenal player. He gives you the ability to smile at the TV.

“He’s been loyal. The fact he stayed at Villa last season is enough for them to clap him out of the stadium and say thank you.

“He’s paid his dues. He’s got them up and he’s kept them in the Premier League.

“If he’s going to go anywhere where he would add value to that team – I think [it would be Manchester] City. He improves them – he gives them something.”