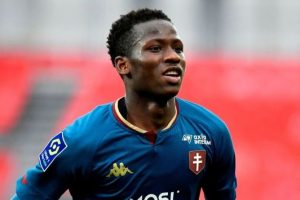 Manchester United are simply scouting Pape Matar Sarr amid reports Metz’s president is in England for talks with Premier League clubs. The Red Devils have continuously been linked with the 18-year-old midfielder, who could be on the move very soon after emerging as one of the brightest talents in French football.

The teenager is the latest success story from the Generation Foot academy set up, which has unearthed a host of Senegalese talent including Sadio Mane and Ismaila Sarr.

Sarr first arrived in France when he joined Metz last year but he has already begun to make immediate waves at the club.

He has featured in both of Metz’s Ligue 1 games so far this season and has now racked up 22 appearances since making his debut last term.

The midfielder has also picked up his first senior cap for his country as his stock continues to rise with every match that goes by.

United, Manchester City, Chelsea and Real Madrid are among those to have been linked with him in the press.

But according to Fabrizio Romano, United’s interest only goes as far as scouting the player, for now.

He told The United Stand: “I am told when I’m asking about this kind of player that Manchester United are scouting him.

“The answer is always ‘remember we are scouting like 200 players in one year so it’s normal for top clubs to contact this kind of player.’

“I don’t see it as imminent but it could be an opportunity for the future.

“It’s one of the most interesting players they have in France now in this position.

“It’s one of other clubs are keen on as well but it’s not one where anything is going to happen in the next few hours.”

United are looking to add another midfielder to their ranks before the transfer window closes on August 31 though.

However, that is only likely to happen if United raise some additional cash through player sales.

Jesse Lingard, Andreas Pereira and Phil Jones are currently on Ole Gunnar Solskjaer’s transfer list and all three could depart if the right offers arrive.

West Ham are expected to return for Lingard while Everton have shown an interest in the Brazilian.