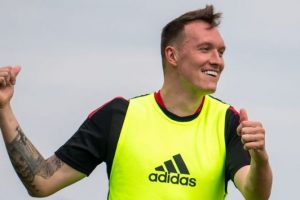 Phil Jones is finally ready to end his Manchester United nightmare and cut ties at Old Trafford, with the defender reportedly willing to listen to offers from the Championship.

Jones, 29, was a highly sought-after prospect when United bought him from Blackburn Rovers in 2011 for a fee of £16.5million.

Having played 35 Premier League games for the Lancashire club at the age of just 19, Sir Alex Ferguson was supposedly so impressed with Jones’ leadership skills at the back for Rovers that he subsequently bought the defender on a five-year deal.

So much so, that in 2013 Ferguson even went on record to say that Jones ‘could be United’s best ever player’; a flattering assessment from football’s most decorated manager.

However, despite a solid enough start, it went downhill for the Preston-born defender.

Spells in and out of the Manchester United side meant that Jones became an irregular squad member following Ferguson’s retirement, and coupled with injuries it means that Jones featured in just 28 Premier League games in 2015-16 and 2016-17 combined.

Becoming somewhat of a laughing stock on social media due to his many different facial expressions, Jones has played just two Premier League games of the last 78 – in a 3-3 draw with Sheffield United and a 2-0 loss at home to Burnley.

And, with the arrival of Raphael Varane and the continued form of Harry Maguire, Victor Lindelof and Axel Tuanzebe, it could be that Jones may never play for United again despite his 165 league appearances so far.

In a bid to revitalise his career, Jones is now welcoming the opportunity of leaving United for the Championship – although there are no takers as of yet, most likely down to his astronomic wages for a club in the second tier.

According to Football League World, it is thought Jones’ preference of club would be one challenging for promotion, which may alert favourites Fulham, West Brom or Bournemouth.

But, with the transfer window rapidly closing and clubs pushing the panic button, he may well attain a Premier League switch just yet.

United drew 1-1 on Sunday in a lacklustre performance at Southampton following their 5-1 rout over Leeds on the opening weekend.

Fred’s unfortunate own goal gave the home side the lead- yet despite Mason Greenwood’s equaliser, the Red Devils couldn’t push on and find the winner.

Fred and fellow midfielder Nemanja Matic were blasted by pundits and their manager alike for a lack of commitment in the centre of the park, which was ultimately United’s downfall.

However, Ole Gunnar Solskjaer’s men can get back to winning ways against Wolves at Molineux on Saturday.