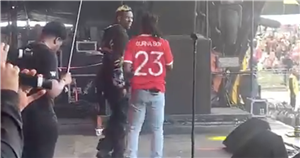 The France midfielder played a key part in United's resounding victory at Old Trafford, registering two assists on an afternoon which saw returning hero Cristiano Ronaldo mark his comeback with a brace.

It was a terrific afternoon for United, and Pogba, 28, followed up his solid performance by appearing on stage at Parklife.

The Manchester festival got underway in Heaton Park on Saturday and runs until Sunday night, with famous rapper Burna Boy one of several artists performing.

But the 40-year-old's set turned out to be no ordinary one, as to the surprise of everyone in attendance Pogba joined him on stage.

Burna Boy had been at Old Trafford earlier in the day to watch his pal pull the strings in United's thrashing of Newcastle before heading to Parklife.

Do you think Paul Pogba can inspire Manchester United to the Premier League title this season? Let us know in the comments section below.

And the pair traded places when Pogba made an appearance at the festival later that night, dancing and singing with the Nigerian on stage.

Burna Boy is one of the most successful African artists of all time, winning a host of awards after rising to prominence with his 2012 single "Like to Party".

Pogba, meanwhile, is thriving at the heart of United's midfield right now after boosting his assist tally on Saturday.

The £89million ace has already provided more assists in the first four matches of the 2021/22 Premier League campaign (7) than he managed in the last two seasons combined (6).

In the 4-1 hammering of Newcastle, he first teed up Bruno Fernandes to fire home a spectacular long-range effort, before finding Jesse Lingard in the box for United's fourth goal on the day.

Pogba will hope to keep his purple patch going when the Red Devils take on Young Boys in their first Champions League outing of the season on Tuesday.