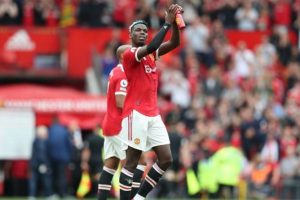 Manchester United are targetting a forward for next summer and a sensational bid for Kylian Mbappe could rely on the future of Paul Pogba. It looks increasingly unlikely that Paul Pogba will commit his future to Manchester United as the midfielder enters the final year of his contract.

The Frenchman starred for United during the 5-1 dismantling of Leeds in their Premier League opener, but Pogba could leave Old Trafford for nothing next summer.

Pogba has been heavily linked with Paris Saint Germain during the current window, but after the French club added Lionel Messi to their ranks, Mauricio Pochettino’s side appear likely to make a move next season when the midfielder could be signed for free.

PSG have a similar problem themselves, as generational talent Kylian Mbappe could also walk away from the club next summer.

And if Pogba departs United, it could free up the wage requirements to land the forward.

JUST IN: Man Utd boss Solskjaer explains what Varane is like in private

Mbappe is on Manchester United’s list of transfer targets as they look to sign a marquee forward next summer according to ESPN, meaning that the French pair could trade places.

Edinson Cavani is expected to leave the club at the end of the season, and Mason Greenwood has been filling in for the Uruguayan as he returns from his summer endeavors, meaning that United are in desperate need of a new forward to lead their line.

Ole Gunnar Solskjaer has remained tight-lipped on Pogba’s future when asked about the progress of a potential new deal ahead of United’s trip to Southampton on Sunday.

“Well, that’s negotiations with Paul’s representatives and the club,” he said.

Mbappe will be on the radars of the European elite and would become a free agent following the expiry of his contract.

However, only a few clubs could afford his mammoth salary with Real Madrid and United leading the race. And with Pogba and Cavani potentially leaving the club, the Red Devils would have the salary ready.

Mbappe has been heavily tipped for a move to Real Madrid, and Los Blancos are expected to go all out for the 22-year-old, as La Liga are missing a major star following the exit of Lionel Messi.

Despite this, the prospect of the Premier League may be enough for Mbappe to favour the move to England.

Pogba may be a rumoured departure for next summer, but Solskjaer has confirmed that young midfielder James Garner will go back out on loan to the Championship this season.

Brandon Williams could leave Old Trafford and join a fellow Premier League side on loan, with Norwich City the likely destination.

Amad Diallo had also been linked with a loan move, but Solskjaer has now said he “wouldn’t be surprised” if he stayed at the club.

The Ivorian has enjoyed a fine summer at Old Trafford after featuring following in pre-season and could remain with the first-team and Under-23s development squad.

United will be hoping to mount a serious title challenge this season and end their nine-year wait for a Premier League crown, with new signings Jadon Sancho and Raphael Varane ready to succeed.

A successful season could be enough to tempt Mbappe into a move, with his favoured no.7 shirt likely to be available.