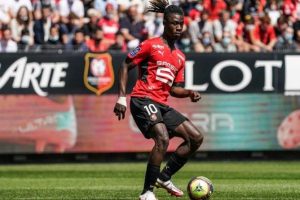 Manchester United may have signed Jadon Sancho and Raphael Varane but Ole Gunnar Solskjaer is not done yet. The Red Devils coach still has his sights set on a midfielder with Eduardo Camavinga on his transfer wish list.

United can still utilise Jesse Lingard in the transfer window to bolster their funds and sign Rennes ace Camavinga.

The England international spent the latter stages of last season on loan to West Ham where he stunned everyone.

In a short space of time, Lingard went from forgotten man to leading star in east London but he has returned to Old Trafford since.

Unfortunately, with Bruno Fernandes nearly undroppable and more chances for Donny van de Beek, it looks like a glum return to the norm for Lingard.

That is despite heavy interest in his services from West Ham and Leicester but Solskjaer has insisted he does not want to lose the midfielder.

But selling him now while his market value is high would make the most sense for the Red Devils – especially since they need the funds.

After signing Sancho and Varane for a combined £103m, that has left the club’s piggy bank light – but Lingard could easily command £25m in today’s transfer market.

That would be enough to prise Camavinga away from Rennes, who has been given the same price.

Ligue 1 clubs are in a financial pickle after a TV deal went sour amid the Covid pandemic while the 18-year-old will see his contract expire at the end of the season.

It means Rennes are hoping to sell the teenager rather than lose him for nothing amid interest from Real Madrid, PSG and United.

His agent Jonathan Barnett has also been advising the France international that a move to Old Trafford would be the best step for his career – and a decision will have to be made soon.

With Paul Pogba’s contract situation, Camavinga would be the ideal transfer at United and selling Lingard will give the club the funds they need.