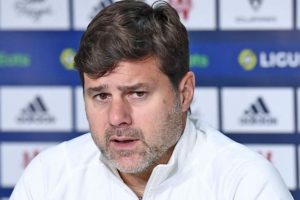 Manchester United approached Mauricio Pochettino when he was jobless but stopped short of making the Argentine an offer to take charge, reports say. The Paris Saint-Germain boss is now being linked with a move to Old Trafford in the wake of Ole Gunnar Solskjaer’s sacking. However, he’s not the only name in the frame.

United sacked Solskjaer on Sunday, dispatching the 48-year-old just hours after a chastening 4-1 defeat to Watford at Vicarage Road.

The Red Devils had, previously, held fire because they’d hoped the Norwegian would be able to turn things around.

However, as United slumped to a seventh defeat from their last 13 matches across all competitions, the Glazers realised the situation needed addressing.

The Red Devils wished their former striker well, in stark contrast to the blunt statement they put out when Jose Mourinho lost his job three years ago.

And, now, Pochettino is in their sights.

The Manchester Evening News say that, prior to the Argentine taking the PSG job in January, United had approached him about managing at Old Trafford.

They did so when Pochettino was on the market and picked up the phone after their 6-1 defeat to Tottenham early last season.

However, United never made him an offer.

And whether they now vigorously pursue the former Tottenham manager remains to be seen, especially with the board also having other managers on their shortlist.

One is Brendan Rodgers, who has done well at Leicester by winning the FA Cup and Community Shield over the past year.

However, the Northern Irishman has insisted he’s happy at the King Power Stadium and unconcerned by the ‘rumours’ regarding his future.

Erik ten Hag is another candidate, with the Dutchman doing well at Ajax over the past four years.

But he’s shut down talk of a move to United by stressing his commitment to the Amsterdam outfit.

United have indicated they want an interim boss to see out the season before making a decision on their next manager in the summer.

Laurent Blanc would be an option, even if the Frenchman is currently working in the Middle East with Al-Rayyan.

And Ralf Rangnick and even Steve Bruce have been tipped to take the job.

Rio Ferdinand, meanwhile, has reacted to the news of Solskjaer’s departure.

The former England centre-back is ‘disappointed’ things didn’t work out for his old team-mate, while also acknowledging the brutal way football is.

“The team has gone backwards since the start of the season after a very, very excitable transfer window with some huge names coming in,” he said on BT Sport.

“It’s not gone the way we want it to go.

“I thought then was maybe the time and then the international break comes, you wait, and you think ‘actually I can get things right, things can change again’.

“And then what you saw against Watford yesterday was terrible.

“So I’m not surprised. Disappointed, obviously, in the way the team has performed.

“It’s unfortunate for someone like Ole but it’s the way football goes, it’s the world of football, it’s a cutthroat industry.

“And when things aren’t going to plan, the big decisions are made.

“Where they go from now we’ll have to wait and see. Michael Carrick is going to be in charge until an interim is brought in and it’s a waiting game now.”