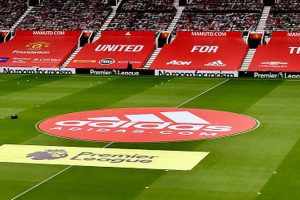 With a club as big as Manchester United, it’s no surprise that The Red Devils have commercial partners with so many different companies.

According to the club’s official website, United have no fewer than 48 different partners, which can be categorised into global partners, financial partners, media partners, and regional partners.

The list of partners is led by sports brand Adidas, who have been the club’s official kit supplier since 2015.

United signed a ten-year sponsorship deal with the sportswear giant worth £750million, which came into effect after the club’s deal with Nike came to an end upon the conclusion of the 2014-15 campaign.

Such a deal – which sees United earn £75m a year – is a huge increase on the £23.5m paid to the club each year by previous sponsor Nike.

The club’s official kit sponsor, TeamViewer, also ranks highly on the list of global partners following it’s unveiling as the official shirt sponsor for the 2021-22 season.

TeamViewer – who are one of Europe’s leading software firms – agreed a five-year partnership with United back in July of last year.

American manufacturer Kohler are also a principal partner of United, while Russia’s largest airline, Aeroflot, Apollo Tyres, and Cadbury are some of the other major global partners. Here is a full list of the club’s partners…