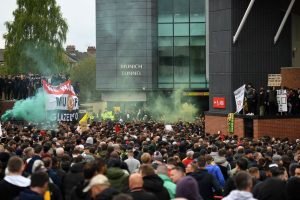 Manchester United's Premier League clash against Liverpool has been postponed following widespread protests at Old Trafford on Sunday evening – with fans getting onto the pitch.

The fixture between the two old rivals was been targeted by home supporters as a continuation of their recent discontent over Glazer ownership of the club.

While the planned kick-off time of 4:30pm was initially delayed, that plan was scrapped following talks over the safety of those involved – including players.

As well as numerous groups forming outside the ground, many were spotted on the Old Trafford pitch just hours before their fixture was due to start.

The latest protest comes after a large scale gathering outside the ground following the failed European Super League plans, as well as a training ground meeting.

While supporters were cleared from the pitch and the surrounding area long before the announcement, the disruption was said to have put those involved in danger.

The full United statement reads: “Following discussion between the Police, The Premier League, Trafford Council and the clubs, our match against Liverpool has been postponed due to safety and security considerations around the protest today.

“Discussions will now take place with the Premier League on a revised date for the fixture.

“Our fans are passionate about Manchester United, and we completely acknowledge the right to free expression and peaceful protest.

“However, we regret the disruption to the team and actions which put other fans, staff, and the police in danger. We thank the police for their support and will assist them in any subsequent investigations.”

As chants and songs broke out among the group that entered the pitch earlier in the day, a flare could be seen flying through the air and hitting the side of the open-air Sky Sports studio.

Fans were also spotted necking cans of lager on the Old Trafford pitch, with tempers even rising among the pundits watching the game.

While Dave Jones hosted proceedings, Graeme Souness, Roy Keane and Micah Richards had all stepped away from the box as their awaited the 16:30 kick-off.

On their return, Gary Neville hit out at Jones for 'butting in' as he was discussing the reasons behind the protests, and how they might've got out of control.

Neville said: "I've never thought they were brilliant owners but I've also seen in football that there are worse owners than the Glazers family.

"However, I think all football fans should unite today behind what United fans have done because what they [the Gazers] did two weeks ago was dangerous for English football.

"We must not forget that. They tried to walk away and create a closed-shop league that would have created a famine in this country for every other football club…"

As Neville looked to continue , though, the Jones jumped in for some clarification on the former defender's call to arms.

Jones interjected: "Gary, what are you saying here? Are you saying that all fans should try and get matches called off?"

But the United legend was not impressed at all, laying into the Sky Sports presenter with: "Dave, let me finish.

"Dave, this is not a time to interject and start that."