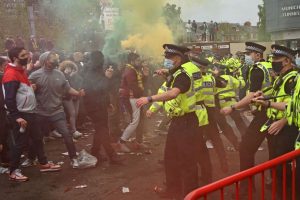 Manchester United's clash with Liverpool on Sunday has been postponed after United fans stormed onto the Old Trafford pitch to protest against the Glazer family.

Supporters were seen carrying flares on the pitch and demanding that the family leave the club following their scheme to join the failed European Super League.

Fans initially blocked gateways and entrances to the ground before breaking into the stadium, with one supporter even seen climbing on the goalposts.

A revised date and time for the match is still to be confirmed.

A United statement read: "Following discussion between the Police, The Premier League, Trafford Council and the clubs, our match against Liverpool has been postponed due to safety and security considerations around the protest today.

"Discussions will now take place with the Premier League on a revised date for the fixture.

"Our fans are passionate about Manchester United, and we completely acknowledge the right to free expression and peaceful protest.

"However, we regret the disruption to the team and actions which put other fans, staff, and the police in danger.

"We thank the police for their support and will assist them in any subsequent investigations."

The Premier League also released a statement which read: "Following the security breach at Old Trafford, the Manchester United vs. Liverpool game has been postponed.

"This is a collective decision from the police, both clubs, the Premier League and local authorities.

"The security and safety of everyone at Old Trafford remains of paramount importance. We understand and respect the strength of feeling but condemn all acts of violence, criminal damage and trespass, especially given the associated COVID-19 breaches. Fans have many channels by which to make their views known, but the actions of a minority seen today have no justification.

"We sympathise with the police and stewards who had to deal with a dangerous situation that should have no place in football.

"The rearrangement of the fixture will be communicated in due course."

Former Liverpool defender Jamie Carragher was working at the match for Sky Sports, and said he understood the anger from supporters.

“We can only speak about what we’ve seen in here. Do you want to see supporters storming stadiums left, right and centre and getting games called off? No, we don’t," he said.

"When I was a supporter as a young kid, this particular thing didn’t go on like that, but I’m not someone that will sit here and criticise Manchester United fans because I’m Liverpool.

"There will always be idiots who get involved in this, this thing that Manchester United fans have done today, I actually think it’s a good thing in terms of protesting and not being happy about what’s going on at the club.

"There will always be one or two people who take it too far and that’s not just a protest, that’s a night out with your mates – there’s always someone who does something stupid.”