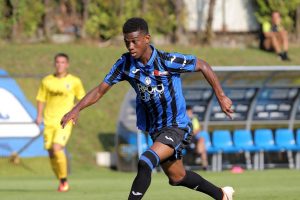 The January transfer window is up and running and Manchester United are facing a number of key decisions.

United have been awaiting the arrival of Amad Diallo for some months after securing the teenage prospect on Deadline Day last October.

But Diallo's January move to Old Trafford was thrown into doubt as Atalanta boss Gian Piero Gasperini outlined his desire to keep the 18-year-old on loan for the rest of the season.

It has left the United hierarchy facing a decision over Diallo's immediate future, while they have also had to make up their minds on how to deal with Paul Pogba.

The Frenchman has made no secret of his desire to leave the Red Devils and it appears he will be granted his wish this summer.

Pogba's expected departure may be eased by the arrival of a star from Borussia Dortmund, as United ponder a swoop for Erling Haaland or Jadon Sancho.

Manchester United are unfazed by Atalanta's desire to keep hold of Amad Diallo and have no plans to let the teenager extend his stay in Italy with a loan.

Diallo has been pictured on a plane to Rome and is expected to arrive in Manchester in the middle of the week, reports the Manchester Evening News.

Last week, Atalanta boss Gian Piero Gasperini made a last-ditch attempt to keep hold of Diallo for the remainder of the season.

United signed the 18-year-old Ivorian in a deal worth up to £37million in October on the assumption he would link up with his new teammates at Old Trafford in January.

That remains the Red Devils' plan and they are confident of securing a work permit ahead of Diallo's expected arrival in a matter of days.

Pogba will be sold

Manchester United are resigned to selling Paul Pogba this summer in the knowledge the Frenchman will not sign a new deal.

Pogba is under contract at Old Trafford until the summer of 2022 but agent Mino Raiola confirmed the midfielder is "unhappy" and would like to leave.

Mirror Sport understands the United hierarchy has accepted Pogba will not pen a new contract, and this summer they will attempt to recover as much of the £89million they paid Juventus for him in 2016 as possible.

Juve are among the 27-year-old's suitors, while Paris Saint-Germain and Real Madrid are also monitoring the situation.

Will Manchester United regret selling Paul Pogba this summer? Have your say here.

Erling Haaland has emerged as Manchester United's priority transfer target as they cool their long-term interest in Jadon Sancho.

Mirror Sport understands Old Trafford chiefs no longer see the England international as central to their future plans thanks to their impressive first half to the Premier League season.