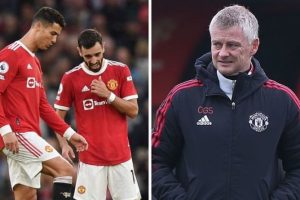 Manchester United will be looking to turn over a new leaf after the international break, starting against Watford today. Express Sport takes a look at who Ole Gunnar Solskjaer is likely to go with.

Dean Henderson had looked to be in contention to become United’s new No 1 during the summer, but he’s dropped out of contention this season.

David de Gea has arguably been one of only a few bright spots for United this season with the Spaniard putting in some impressive displays.

That’s unlikely to change any time soon with De Gea solidifying himself as Solskjaer’s first-choice.

Henderson appears to be growing frustrated at a lack of opportunities and may need to leave to find regular minutes.

Solskjaer changed things up last time out against Manchester City as he played with three central defenders.

Eric Bailly came in for his first Premier League appearance of the season, but he endured a torrid first half before being taken off at the break.

Solskjaer may well revert back to his usual back four, although Raphael Varane remains unavailable due to a hamstring problem.

There is good news on Luke Shaw though as he’s been deemed fit to feature and could slot in.

There’s been plenty of focus on United’s midfield three this season with Bruno Fernandes even struggling to find some form.

There have been some calling for Fernandes to be taken out of the firing line to give Donny van de Beek a chance in the advanced role.

But it’s been the defensive pairing of Fred and Scott McTominay which has come under the most scrutiny.

A lack of options leaves Solskjaer with limited alternatives though and McTominay looks set to feature again.

With a hectic festive schedule coming up and some important matches on the horizon, Solskjaer faces a big decision on Cristiano Ronaldo.

He started both World Cup qualifiers for Portugal during the international break, playing a total of 180 minutes as they failed to qualify for the major tournament.

But with United desperately needing a win in the league to revive their campaign, Ronaldo will be expected to start.

Marcus Rashford has looked impressive since coming back from injury while Mason Greenwood may have done enough in recent weeks to keep his space.