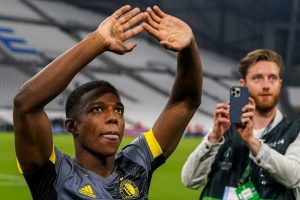 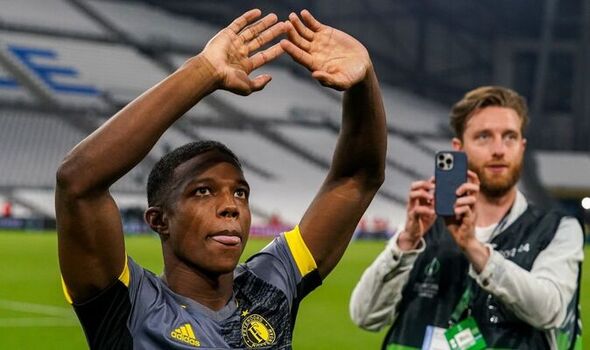 Manchester United will have to move quickly if they are to secure the signing of Feyenoord full-back Tyrell Malacia this summer with the Dutchman now in talks to join Lyon, according to reports. Express Sport understands the Red Devils have been casting an eye over the 22-year-old’s performances in the Eredivisie in recent weeks with new Erik ten Hag a fan of the defender.

United are expected to make plenty of new signings this summer and up to 10 new faces could arrive at Old Trafford.

One of the club’s reported targets is Malacia but according to journalist Jonathan Shrager, talks between Malacia and Lyon are now advancing.

The French club are in the hunt for a new left-back with Emerson Palmieri set to return to Chelsea following a season-long loan spell.

A number of Italian clubs would like to take the defender off Chelsea’s hands but the Blues will have to resolve the situation regarding their new owners first, before engaging in transfer business.

Malacia has emerged as one of the brightest young prospects in Holland, having now been capped three times by the national side.

Although United are not necessarily in the market for a left-back, Ten Hag could be set to make wholesale changes to the squad he inherits from Ralf Rangnick.

Alex Telles could yet seek to explore a new challenge after just two seasons at Old Trafford.

Feyenoord value Malacia at around £16million, although they could set to demand a higher figure if there is intense competition for his signature.

United scouts are understood to have been left impressed by his recent performance in the UEFA Conference League semi-final against Marseille (3-2 win for Feyenoord).

The Dutch side completed the job on Thursday as they booked their place in the final in Tirana following a 0-0 draw at the Stade Velodrome.

Aaron Wan-Bissaka and Eric Bailly will both get the chance to leave United this summer, should they be willing to push for an exit.

The £50m right-back is wanted by Crystal Palace but Ten Hag will be keen to take a closer look at Wan-Bissaka before agreeing to any sale.

Roma and Atletico Madrid are also thought to be keen on his services after three seasons at Old Trafford.

Meanwhile, Bailly could head to France or Italy – if United agree to let him leave – after yet another underwhelming campaign.

Marseille, Lyon, Newcastle and Roma are all reportedly interested in the Ivorian.