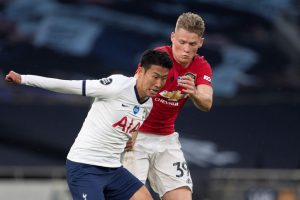 Manchester United have taken disciplinary action against six of their own fans alleged to have racially abused Tottenham star Heung-Min Son on social media.

United launched an internal investigation following the game against Spurs on April 11 and have sanctioned all those involved.

Three season ticket holders, two official club members and one individual on the season ticket waiting list have all been suspended from the club, pending an appeal.

The move comes as United get set to join football's social media boycott in a bid to stamp out discrimination on all social media platforms.

United will join the rest of football and others sports in taking part in the protest from 3pm today until 11.59pm on Monday in response to the ongoing and sustained abuse received by players and others connected to football.

United has published statistics which highlight the growing scale of the online abuse directed at its players.

The review looked at online activity from September 2019 to February 2021 and checked for abusive words being used against players' names or account handles and covered racist, homophobic and abusive comments.

It found that in that period there was a staggering 350 per cent increase in abuse directed towards Ole Gunnar Solskjaer's stars, with 86 per cent of these posts being racist.

United Managing Director Richard Arnold said: "We have been actively campaigning against discrimination for some time through our 'All Red All Equal' initiative.

"The level of support we have received for this work from our fans has been hugely encouraging but these figures show that despite that, the level of abuse our players and fans receive is on the up.

"It must be said that while these numbers are shocking, they do only represent a 0.01 per cent of conversations that take place on social media about the club and the players.

"By taking part in this boycott this weekend, we, alongside the rest of English football, want to shine a light on the issue. It will generate debate and discussion and will raise awareness of the levels of abuse our players and our fans receive."

United have set up a new online reporting system for fans to use available via manutd.com/seered. United will work with the Premier League to escalate any complaints received to the social media platforms and the relevant authorities.