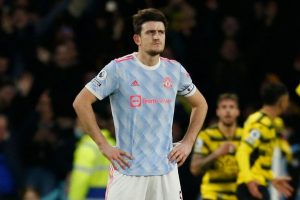 Maguire was promoted to the role of captain at Old Trafford just five months after joining the club from Leicester City when he replaced Ashley Young after his move to Inter Milan.

The England defender has remained in the role since but this could change when a replacement for Ole Gunnar Solskjaer is appointed by United.

The Norwegian was sacked by the club on Sunday morning following the 4-1 loss at Watford on Saturday with Maguire sent off after receiving two yellow cards during the defeat.

The Manchester Evening News report that a number of United players resented the decision to promote Maguire to captain back in early 2020.

Maguire had made just 29 appearances for United when Solskjaer appointed him as captain.

Another player is said to have questioned why he was dropped by Solskjaer but Maguire and Fred remained in the team despite struggling for form so far this season.

One player's dad is also reported to have said that his son had been "c**p for weeks".

Should Harry Maguire be replaced as Manchester United captain? Let us know in the comments section below.

Maguire has come in for considerable criticism for his performances for United so far this season, with Roy Keane labelling him embarrassing during England's win over Albania earlier this month.

The 28-year-old was sent off on Saturday after picking up two yellow cards in seven minutes during the second half.

He was given his marching orders by Jonathan Moss for a lunge on Tom Cleverley after he had lost the ball trying to dribble out from defence.

His dismissal means that Maguire will now miss next Sunday's trip to league leaders Chelsea in the Premier League but he will be available for Tuesday's Champions League clash away to Villarreal.

It was the fifth sending off of Maguire's career but his first in a United shirt with three coming at Sheffield United and one at Leicester.