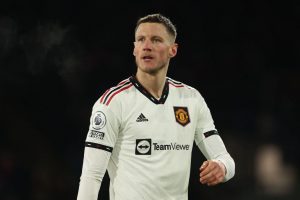 Arteta welcomes Trossard to Arsenal ahead of Man Utd clash

Wout Weghorst has assembled a four-person team to help him become a ‘mega-professional’ like Cristiano Ronaldo and Zlatan Ibrahimovic. Manchester United’s latest signing is confident he’s in his peak years as he looks to make an impact after completing a dream loan switch this month.

Weghorst has joined Erik ten Hag’s revolution from Burnley for the remainder of the season, cutting his Besiktas stint short for a second chance in the Premier League.

The Netherlands international showcased a teaser of what he can offer at the Red Devils on his debut at Crystal Palace on Wednesday.

And he has revealed the steps he has taken to ensure he can enjoy similar longevity to former United strikers Ronaldo and Ibrahimovic.

Weghorst said: “In the end, you have to do it on the pitch. There’s only one person ultimately responsible for that – and that’s me.

“But I keep looking at things that can support me. I’ve had Joost Leenders working as my mental coach for a number of years.

“Three years ago, I added two people to my coaching team: a physical trainer and a new mental coach.

“I also have my own physiotherapist, a nutritionist, and I’m still coached by former player Simon Cziommer. I also use a volleyball coach to help me with my headers.

“On my days off, I’m training hard. I don’t always feel like it, but I want to keep developing.

“The more you work on points of improvement, the fewer remain. You edge closer to becoming the complete striker.

“I will definitely keep working – but I’m noticing that I’m getting closer and closer to being the ultimate version of myself as a striker.”

United may have recruited Weghorst as a short-term fix before pursuing a marquee striker signing this summer.

However, the 30-year-old believes he is hitting his peak and will be eyeing an Old Trafford stay beyond the end of the season.

“You can see from my stats that I’m in the best period of my career so far – I see this as just the start,” Weghorst explained.

“I’m convinced that everything you put into your career comes back to you by working hard with good people around you.”