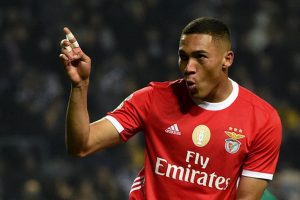 Vinicius spent last season on loan in the Premier League with Tottenham Hotspur, and he bagged nine goals in 23 appearances.

However, he was used sparingly in the presence of Harry Kane, and Spurs opted against triggering his £36million purchase clause.

And the Red Devils are eyeing a move for the striker as Ole Gunnar Solskjaer looks to bolster his attack force with the addition of a new striker.

But United aren't the only club interested in the Brazilian's signature, and both Juventus and Bayern Munich are tracking the striker.

Vinicius initially impressed during the 19/20 campaign, and he bagged 18 goals and eight assists in the Liga NOS.

However, according to Portuguese outlet A Bola, United are looking to move for the striker again this campaign.

Currently, Solskjaer only has one out-and-out striker in his team, Edinson Cavani, and wingers Anthony Martial and Mason Greenwood have been forced to play makeshift attacking roles.

A loan move for Vinicius could help solve that problem as well as allowing them to comply with FFP following the acquisitions of Jadon Sancho and Raphael Varane.

Do you think Vinicius could move to United? Let us know in the comments section

Wolves are also interested in offering the Brazilian a move back to the Premier League.

Wolves are looking to replace Rafa Mir, who looks set to leave the Midlands side this summer to move to Spain.