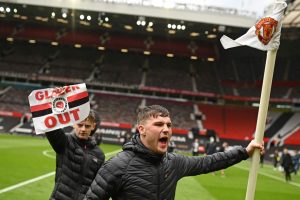 Manchester United have defended their handling of the mass protest and violent storming of Old Trafford that saw Sunday's game against Liverpool called off.

Around 200 fans, protesting at the Glazer family's ownership of United, forced their way past security and broke into Old Trafford, invading the pitch and causing criminal damage to property.

United and Greater Manchester Police are under pressure to explain how a security cordon at Old Trafford was breached by protestors, who were then able to gain access to the stadium.

CCTV video from Old Trafford shows scores of fans bursting through a door by the Munich tunnel, which was opened from the inside by protesters who had already gained illegal access to the stadium.

Subsequent footage, posted on social media, shows security personnel at Old Trafford allowing fans to walk through an open door into the stadium, but United insist the staff were following orders not to challenge protesters, for their own safety.

After a second invasion of protesters, United were eventually able to secure the stadium, but the Premier League fixture, scheduled for a 4.30pm kick-off, was officially postponed shortly after 5.30pm.

Despite public warnings of the mass protest, there was inadequate stewarding and policing to deal with the thousands of fans who descended on Old Trafford and ultimately broke into the stadium.

But United have defended their handling of Sunday's events, with a club source claiming they had planned for a “peaceful protest” and that deploying more stewards, more robust crash barriers and insisting on a greater police presence would have sent out a “confrontational” message that the club wanted to avoid.

As it was, the security and policing measures in place were woefully inadequate to deal with the violent scenes that unfolded, with Greater Manchester Police having to draft in officers from neighbouring forces to help bring the situation under control.

GMP Assistant Chief Constable Nick Bailey said: "The behaviour shown at this protest was absolutely atrocious. Officers were just trying to do their job and facilitate a peaceful protest.

“However, a number of those present became hostile and aggressive towards officers and forced entry to the football grounds, making it very clear that this protest was not peaceful and ruining it for the majority of protesters who had not intended for the protest to become violent.

"Our officers tried to engage with protestors, but were met with violence and aggression which resulted in enforcement action being taken. Enforcement will always be a last resort, but in these circumstances it was deemed necessary in order to maintain safety during a situation that was rising in hostility.

“We are reviewing all obtainable evidence and following all lines of enquiry available to us in order to identify the organisers of this protest as well as those responsible for the officer assaults.”