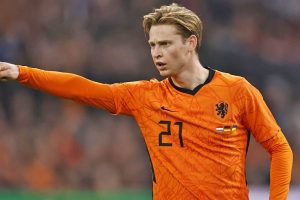 Manchester United are prioritising a centre-back, full-back and a striker as well as Barcelona’s Frenkie de Jong, it has been claimed. The Glazers have already pledged to spend the money and ‘work hard’ in order to back Erik ten Hag. And it appears new reinforcements are incoming, even though there’s been a delay to proceedings at present.

Manchester United owner Avram Glazer recently vowed to back Ten Hag, insisting the club would ‘work hard’ to bounce back after a ‘disappointing’ season under Ole Gunnar Solskjaer and Ralf Rangnick.

And, since then, it’s become common knowledge that the club want to land De Jong from Barcelona.

The Netherlands international is Ten Hag’s top target, with the duo previously working together at Ajax.

And, now, Fabrizio Romano has claimed United want to strengthen three other areas of their squad as well.

“Frenkie De Jong, a centre back, full back and a striker will be prioritised first this summer,” he said on the Que Golazo Podcast.

They’re currently placing all their eggs in the De Jong basket, with Barcelona open to cutting the 25-year-old loose to help balance their finances.

It was previously reported that De Jong had doubts about moving to United, especially with no Champions League football to offer.

Yet the Dutchman has apparently been convinced that his future lies at Old Trafford after talking with Ten Hag in secret.

Barcelona want a fee close to £70million to let the former Ajax star go this summer, three years after they brought him to Catalonia.

But United are ready to play a waiting game, believing their La Liga counterparts will end up lowering their asking price.

With regards to full-back, several names have been linked.

While a centre-back by trade, Jurrien Timber is one option. However, it’s possible he’ll end up staying at Ajax instead – especially with the World Cup in Qatar creeping closer.

Denzel Dumfries is another name to keep an eye on, amid claims he could be on the move from Serie A giants Inter Milan.

At centre-back, Timber and Pau Torres are both candidates.

But, when it comes to strikers, things have gone rather quiet since it was revealed Darwin Nunez would be moving to Liverpool – instead of United.

Meanwhile, ahead of the Ten Hag era, Teddy Sheringham has delivered a brutal verdict on the current United squad.

Speaking to Lord Ping, he said: “If you look at all the players last year, you have to ask ‘who has performed to the best of their capabilities?’ I don’t see anyone.

“Everybody needs to step up to the plate if they’re going to be staying at Manchester United.

“Look at the United spine, there are a lot of question marks. De Gea and Maguire are two examples of players who haven’t been at their best and people are asking questions.

“It’s tough times for United. I don’t think there’s anyone who can be assured of their spot in the United team next season.

“There aren’t three outstanding players that ten Hag should build the team around.”

And, on reinforcements, he added: “United need reinforcements across the pitch. In particular centre midfield, centre forward and on the wings.

“We’re looking at five or six top players needing to come in.

“You need players to come in with the right character who appreciate the size of the task and are ready to get United back to where they should be.

“It’s a massive challenge. From a player’s point of view, if you were to pick between City or United, then you’re going to pick City every time at the moment.

“As a player, you want to play with the best players. Top players would love to slot in alongside de Bruyne or any of the world class players City have, the list is endless.

“They are the champions and they will be challenging for everything next season. When you look at Manchester United, you don’t see that.

“There isn’t anyone there performing at the moment. It’s such a despairing thought.”