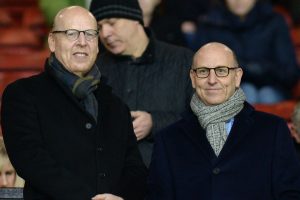 The Glazer family are unlikely to sell Manchester United for anything less than around £5billion if they decide to relinquish their control of the Red Devils in the not-too-distant future, according to reports. It was announced on Wednesday evening that United’s long-term owners were exploring ‘strategic alternatives’ for the club, with an outright sale among the options on the table as things stand.

There is also a chance that the Glazers could stay at United if they opt to seek external investment from minority stakeholders as opposed to relinquishing all of their shares in the club. It seems as though they could ultimately decide to sell up altogether, though, if they receive an offer that meets their lucrative demands over the coming months.

Such a deal would certainly not be cheap for any potential buyer, with the Glazers only willing to listen to offers that fall around the £5bn mark, according to the Daily Mail. However, it is also claimed that they could end up asking for as much as £9bn to give up all of their influence at Old Trafford, which would represent a significant profit on the £790million fee they paid to buy United back in 2005.

Any deal to see the Glazers leave the club would likely go down well with the vast majority of United supporters, who have voiced their collective opposition to their American ownership on a consistent basis over the last few years. The family have struggled to win over the Red Devils faithful since their connection with the club began in 2003, with United’s general decline over the last decade and a perceived lack of investment from the powers that be having contributed to a growing anti-Glazer sentiment within certain sections of their fanbase as of late.

The Glazers’ financial dealings have seen United forced to handle rising levels of debt in recent years, while their failure to ensure a smooth transition after Sir Alex Ferguson’s retirement has led to the club falling away from Europe’s elite in terms of on-pitch performances. The involvement of the Glazers in dragging United into last year’s European Super League fiasco also caused further damage to their reputation, with the wealthy Americans subjected to near-universal criticism from supporters, pundits and former players alike.

It remains to be seen how much the Glazers would be likely to get in practice from any potential sale of United, with Chelsea having been bought by American firm Clearlake Capital for more than £2bn over the summer. Sky Sports reporter Mark Kleinman believes that some parties would be more than willing to pay the £5bn asking price demanded by the Glazers, although the final figure could depend on the level of interest from external investors looking to battle it out for ownership of the Red Devils.

“I think that’s going to be a function of the level of interest in buying United,” said Kleinman when quizzed on how much United could be sold for. “United is the most followed club in the world by some measures with a fanbase numbering over a billion people globally, which is many more than some of the world’s biggest social media networks have.

“I think we are going to be talking about a very substantial sum of money in excess of United’s stock market valuation. When the story broke earlier this evening United share prices rose by 17 per cent, showing that investors believe there is a credible prospect of United changing hands at a valuation far in excess of the current share price.

“Over recent months people have said it might take a £9bn offer for the Glazers to sell. I think that’s pretty farfetched, but £5bn? Well, potentially. If you look at the respective valuations of Liverpool, Chelsea and other clubs which have changed hands in recent times, certainly a £4bn or £5bn figure does not seem out of the question.”