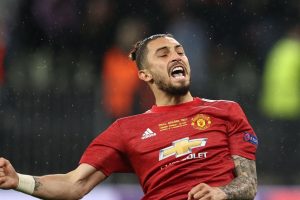 Alex Telles has failed to make the impact he would have hoped for when he put pen to paper on a four-year deal at Manchester United last summer.

The full-back has made just nine appearances in the Premier League as a result of failing to dislodge Luke Shaw who has enjoyed his best ever season in a United shirt.

Telles endured a tricky start to life in Manchester after he tested positive for coronavirus early on, which forced him to sit out two league games due to self-isolation rules, before being an unused substitute in the first Manchester derby of the season.

More recently, he has shed light on what his relationship is like with Red Devils boss Ole Gunnar Solksjaer and how he has assessed his own performances from last season.

The Brazilian told United's official club website: "Yes, I believe I've made the most of this season, I've learnt a great deal, I learnt a lot of things, I've developed as a player and a person as well."

He discussed next season with optimism, claiming: "I'm really happy with my first season at United and I'm sure that next season will be even better.

"I think I always took the opportunity to do my best whenever I was on the pitch. I had good games, with the adaptation process the first season isn't easy.

"But I believe that when Ole gave me the opportunity and placed his trust in me and put me on the pitch, I did my best.

Telles debut season ended in dismal fashion, starting just to league games since the turn of the year before receiving just one minute of playing time in United's biggest game of the season in their Europa League final defeat at the hands of Villarreal.

His comments will put an end to speculation surrounding an exit after just one season at the club.