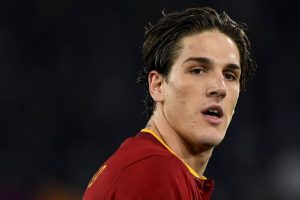 Manchester United have reportedly been offered Arsenal and Tottenham target Nicolo Zaniolo as the Italian weighs up whether or not to leave Roma. Should the Red Devils take up the opportunity, it could come as bad news for Antony and Alejandro Garnacho with the duo potentially seeing their game time cut as a result.

Zaniolo has been linked with a move to the Premier League across the last six months with both Arsenal and Tottenham interested in his signature. Spurs have been the most heavily linked with the midfielder and are widely reported to have made their first offer, trying to nick him on an initial loan with an obligation to buy.

The player is reportedly keen on a move to the Premier League and sat out of Roma’s 2-0 win over Spezia this weekend. While his preference is believed to be Tottenham, he could yet have his head turned by a move to Old Trafford instead with Italian publication Area Napoli stating that he has been offered to the Red Devils.

It is not clear whether or not Erik ten Hag will seek to take advantage of this proposal but some of United’s current stars may be negatively impacted if he does. Antony and Garnacho are two players who could find their game time reduced if Zaniolo was to join with the 23-year-old capable of playing in any of the positions behind the striker.

Garnacho has impressed when called upon this season but has had to be content with appearances from the bench given his age. In contrast, Antony has come in for criticism in recent weeks with fans and pundits questioning his end product. United legend Rio Ferdinand has been among them and was stinging in his criticism following the Arsenal defeat on Sunday,

“He just doesn’t beat anyone and I’m sitting there thinking, ‘Was that always the way?’” he told his FIVE YouTube channel. “I’ve seen clips of him when he was at Ajax and he was somebody who used to beat people.

“I saw Thomas Partey, who I wouldn’t put down as a sprinter, absolutely burst past him, and I’m thinking, ‘Woah, he (Antony) hasn’t got much power in them legs!’ He’s a tricky winger, but with tricky wingers you want them to still be able to beat the defender.”

Roma boss Jose Mourinho, meanwhile, has insisted he believes Zaniolo will remain with them in Italy despite the player’s wishes to leave and high interest from Europe. Speaking after Roma’s win on the weekend, Mourinho said on Zaniolo: “The important thing is that we won and played as a team. I have my opinion and my sensation that come February 1 he will still be here. I realise Nicolo wants to leave, but that is what I feel.”