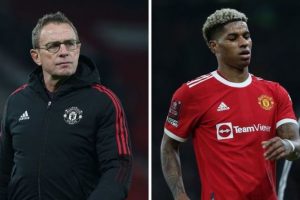 Manchester United are reportedly planning new contract talks with Marcus Rashford ahead of his 2023 expiry, despite growing concerns about the forward’s dismal form. Express Sport look at four more first-team stars who United will want to agree extensions with soon.

David de Gea’s current contract at Old Trafford runs until 2023, with the option of a further year included.

The Spaniard will undoubtedly want to re-sign, given he’s the world’s highest-paid goalkeeper after agreeing terms worth around £375,000-a-week in 2019.

He has rediscovered some of his best form this season, which will likely increase United’s desire to extend his stay.

However, with Dean Henderson waiting in the wings, perhaps a departure for De Gea at the end of next season would help a natural transition of number ones.

Diogo Dalot’s United future looked gloomy after Jose Mourinho’s 2018 exit just months after his arrival, but he has been revitalised under Ralf Rangnick.

The 22-year-old has been Rangnick’s first-choice right-back in the Premier League, featuring prominently over £50million signing Aaron Wan Bissaka.

But the long-term contract he signed four years ago expires next year, and United won’t want to lose someone of his potential for free.

It won’t be surprising if the Portugal international is rewarded for keeping his place in Rangnick’s side with a new, improved contract in the summer.

Luke Shaw’s contract also expires next year, and he’s likely the name on this list United will be most desperate to tie down.

Reports suggested Shaw was in line for an improved contract at the start of this season after his career-best form last season and for England at Euro 2020.

And despite his rocky start to the new campaign, those plans will still very much be in the pipeline.

Fred has sparked mass debate among the United fanbase since his £50m arrival from Shakhtar Donetsk in 2018.

However, the Brazil international has been a mainstay under Mourinho, Ole Gunnar Solskjaer, Michael Carrick and Rangnick.

And despite over-paying for his services, the club will value him as an important squad player, especially with Nemanja Matic expected to leave soon.

Fred recently took to Twitter to explain he is happy at Old Trafford, and it would be a surprise if he didn’t commit his future to United.