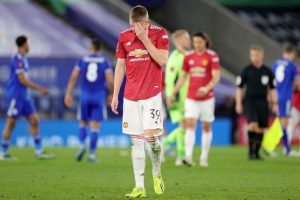 On-fire Kelechi Iheanacho ripped up the history books to fire Leicester into the FA Cup semi-finals.

Iheanacho scored a stunning double and set up another to clinch an FA Cup semi-final clash with Southampton.

Crunch the numbers going in to the game and the stats certainly didn't point to a win for Brendan Rodgers' men.

But Iheanacho and his fellow Foxes had other ideas as they put United to the sword in stunning style.

United had finished winners both times these sides have met in the FA Cup and Leicester had only won one of their previous 25 meetings, stretching back to 1984 and NONE of the last 13. But Iheanacho ran them ragged and his double made it nine goals in his last nine, never mind his overall contribution.

Leicester had every right to feel slightly aggrieved that they went in at half-time on level terms thanks to Mason Greenwood's equaliser shortly before the break.

The home side had enjoyed a clear edge on terms of goal threat but couldn't believe their luck when a moment's madness by United in their own box, gifted them a 25th-minute lead.

United only had themselves to blame when they presented the ball on a plate to man of the moment Iheanacho.

The Nigerian international's confidence would have been high enough after helping himself to his first-ever Premier League hat-trick in the 5-0 destruction of Sheffield United last Sunday.

But Fred generously decided to let him continue his goal streak when he dropped a back pass so short of keeper Dean Henderson it bordered on the ridiculous.

Former Fox Harry Maguire would have been better advised not to give him the ball in the first place but then Fred, under pressure from Youri Tielemans, sloppily shunted it back towards his keeper.

Iheanacho was on it in a flash, nipping the ball around Henderson with his left foot before slotting the ball in from the angle to give Leicester the lead. Jamie Vardy had forced Henderson to save low to his left shortly before and though Kasper Schmeichel had to move sharply to scoop away an Anthony Martial ball which dropped awkwardly in front of him, Leicester had looked more likely.

But United made amends for their cock-up when Donny Van De Beek dummied Paul Pogba's cross allowing Greenwood to sweep the ball home with a well-struck left-foot shot from 12 yards.

But Rodgers' men didn't have to wait long to assert their authority and get their noses back in front – Tielemans scoring a fine goal after an Iheanacho lay-off. The Belgian ace ran towards the edge of the box, with five United players in his immediate vicinity and swept a right-foot shot just inside the post beyond the fingertips of Henderson.

Jamie Vardy was left kicking himself – and the post – in frustration when he missed a great chance to grab a third. He nutmegged big pal Maguire to put himself in a great position but shot wide.

But he needn't have worried – that man Iheanacho wrapped things up swooping at the far post to meet Marc Albrighton's free-kick and powering an unstoppable header into the roof of the net.